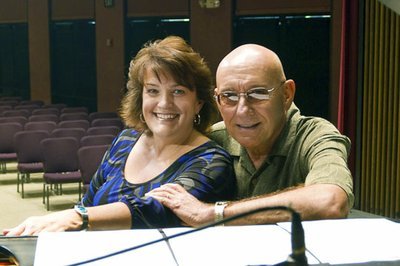 Holly Hofmann and Mike Wofford live together in San Diego but they find almost all of their work outside of the local market. Their CD Turn Signal, released on the Capri label in January 2012, is their first with a co-led quintet.

“It’s nothing like you’ve ever heard us do before,” says Hofmann from the couple’s Mission Valley condo. “It was conceived and arranged by Mike, with a lot of input from me.” In essence, Hofmann describes a tribute record to Wofford’s favorite pianists: Horace Silver, Dick Twardzik, and some of his favorite composers. “We worked on it for a long time together. It has an emotional intensity to it. You can feel it.”

For a change, the couple recorded this time in San Diego. Their preference is for studio space in New York but the complexity of the material on Turn Signal, Hofmann says, required hours of rehearsal time. They chose Studio West in Rancho Bernardo.

“Rob Thorsen plays bass,” says Hofmann, “and on drums we used Richard Sellers.” Terell Stafford weighs in on trumpet. “We flew him in from New York for the sessions.”

Holly Hofmann is a straight ahead a jazz flutist. She recorded her first disc for Capri in 1989. Turn Signal is her 12th CD as a band leader leader, in a career that has included collaborations with such artists as Kenny Barron, Cedar Walton, and Ray Brown.

Mike Wofford has played keyboards behind a host of pop and jazz artists including Sarah Vaughan and Ella Fitzgerald (he served as Ella’s music director for a decade,) Benny Carter, and Zoot Simms. In the 1960s, he signed on with Shelly Manne, a slot he would hold for years.

Why the change in direction for the new record? “Mike is such a fan of so many pianists,” says Hofmann. She describes a current climate of young jazz keyboards that she says, for lack of a better term, overplay everything. “Mike wanted to play his note-economy style. He solos, but by comparison, they’re short. You’re gonna be surprised.”