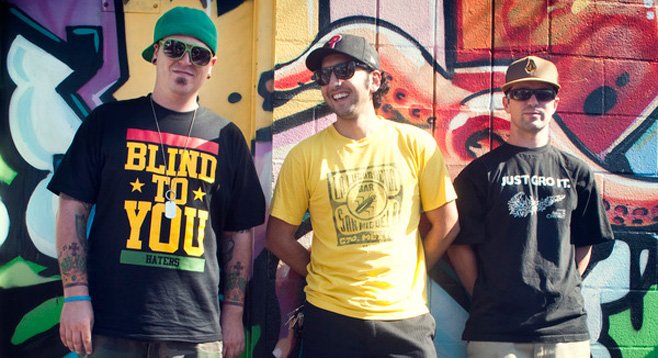 "My shows have a big energy, with the organ and horns blaring at all times," says Mike Pinto, who grew up in a suburb of Philadelphia called Fairless Hills. His music blends reggae, ska, dub, and Latin rhythms, while keeping true to his roots with the acoustic guitar. After a well-received acoustic LP, Pinto completed his first full-length album Little District in September 2005 with fellow Philadelphian, producer Tim Sonnefeld.

The album completes his musical and lyrical vision by combining a full horn section, organ, heavy bass lines, samples, and hip-hop beats. He followed it up in 2009 with Everything I Got.

Based in Ocean Beach, Pinto has played in over thirty states, doing an average of four shows a week, and live acoustic performances for various college and reggae on-air radio stations. He finished recording The West is Still Wild EP in August, 2011, releasing it in late September. It debuted at number four on the iTunes reggae charts.

Guests include drummer Todd Elrod and bassist Matt Brein, formerly of Bargain Music, plus DeLa (Slightly Stoopid), Juan Rios (Seedless), and guitarist Kat, as well as a horn section. The EP was produced by Lewis Richards and recorded at 17th Street Studios in Costa Mesa, which has also recorded the Dirty Heads, Slightly Stoopid, and Sublime with Rome.

The album pays homage to the city where he’s lived since 2005, San Diego. “People make the trip from all over the country because they feel their destiny is to reach the west coast,” says Pinto. “As someone who also was drawn to that same appeal, I wanted to capture that.”

He toured in support of his fifth release Truthful Lies (released May 17, 2013 at the Belly Up) with Hawaiian sons Natural Vibrations and Philly’s Three Legged Fox, beginning May 16 in Long Beach and making 48 stops, including the Cali Roots Festival and the Rockin' Roots Festival.

Truthful Lies was recorded mostly at Soundmine Studios, in East Stroudsburg, PA, and produced by Dan Malsch (the Misfits), Chuck Treece, and Pinto, as well as some tracks by Lew Richards at 17th Street Studios in Costa Mesa. Guest players include Junior Marvin (Bob Marley), Jesse Wagner and Roger Rivas (The Aggrolites), Micah Brown, George Laks (Lenny Kravitz), and Chuck Treece (Bad Brains, G Love, McRad). Featuring 17 tracks, 16 of which are previously unreleased, the album art was created by Jimmy Ovadia out of Ocean Beach, designed to have an ethereal spin to it, while being boldly impressionistic, ala Van Gogh.

With a new single in early 2015 called "Peace of Mind" produced by Bill Moriarty (Dr. Dog, Lotus), he embarked on a mostly-acoustic tour that ran through July 25 in Lombard, Illinois.

2017 saw the release of Hotel Rendezvous, recorded at Killion Sound in Hollywood by Sergio Rios (of the band Orgone). It debuted at #4 on iTunes Singer-Songwriter charts, and was nominated Best World Music Album at the 2018 San Diego Music Awards. Guest players include members of Orgone, the Aggrolites, the Expanders, and Through The Roots.

"I got the idea for the title from a documentary of F. Scotts Fitzgerald. He was explaining his move to Los Angeles to write screenplays in Hollywood through a letter to his friend. He described a hotel he was staying in that discreetly sounded like a bordello. He wrote his friend that he could hear the inspiration for his material through the walls of the hotel every day. So I came up with the song 'Hotel Rendezvous' that day."

With so much time spent on the road, Pinto of course has his own "worst gig" story, this one set in Bakersfield, CA. "We played a festival that had heavy metal stages, like, 200 feet from our stage, playing at the same time. It was a clusterfuck, you couldn’t hear anyone playing. It was like listening to five kids play shitty guitar solos at the same time at Guitar Center, but as an all-day event. I knew the festival wasn't making any money. It was a hundred degrees out, load-in was a bitch, and the sound was absolutely horrific. And, surprise, the check bounced! The promoter lost his ass so badly that he fled the country."

"Just goes to show what touring feels like. One week, you think 'Oh shit, we might actually make it.' Then next week, you wonder 'Is this all just a huge waste of our time?'"

A seven-song EP was released in late June 2019, The Sugarshack Sessions, a full-band acoustic rendition of songs over Pinto’s catalog accompanied by videos on YouTube for every song. It was supported in July and early August by opening for the Long Beach Dub All-Stars and the Aggrolites on the second half of their national tour, including Butler, Ohio's Freakstomp Festival on August 10.

His early 2020 single, "Come A Long Way," featured Jack Johnson's drummer Adam Topol, as his band prepared for a tour that kicked off February 26 in Austin and wrapped May 30 in Ohio.