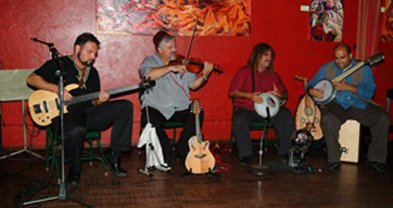 Middle-Earth Ensemble formed as a result of a variety of musicians coming together to perform for the Bellydance Showcases at Claire de Lune Coffee Lounge, starting in 1999. Founder and drummer Frank Lazzaro describes how the band chose its name.

"Besides being an obvious rip-off of Tolkien's Lord of the Rings, the name also describes the style of music we play. Looking at Earth from space, the Middle East, Africa, Asia, and Europe all come together in the Mediterranean, literally meaning the 'Middle Earth.' A lot of our music is derived from the Middle East. Also, Led Zeppelin had an influence on us. They had a lot of Middle-Eastern elements in their music, as well as many lyrical references to Tolkien...we do instrumental covers of a few Zeppelin tunes."