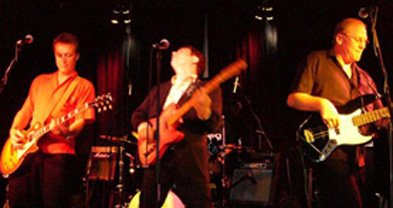 Guitarist/bassist/singer Mark DeCerbo has played on the local scene since moving here in 1975 and forming the pop-rock duo Roots with Gary Lehmann.

Four Eyes themselves got their start circa 1976 as a country boogie band, quickly mutating into a power pop group called Copenhagen. Before the end of the decade, the band became Four Eyes and released a 1980 single, “Penny Pong/Disengaged,” drawing major label attention.

The first Four Eyes album, recorded for MCA in 1982-1983, went unreleased, according to DeCerbo. “Our first record was shelved due the corporate shake-up at MCA, when Irving Azoff took control as president of that company. I do have the masters in my possession.”

DeCerbo says some tracks from the MCA sessions were remastered. “The original MCA record will probably never see the light of day as a complete album. But there will be remastered releases of some and maybe all of those original recordings on upcoming Four Eyes compilations already in the works.”

In 1980, Four Eyes appeared on the original Gong Show, which was mostly known for the participants’ lack of talent. “I wasn’t worried about ridicule,” says DeCerbo, who currently fronts a reunited Four Eyes. “We thought it would be fun and good publicity. I had never seen a real band on there before.…

“They taped three shows in one day,” he recalls. “Unfortunately, we were to be in the third and last show, so we had to hang around, relaxing on big piles of packing blankets from about seven in the morning until five in the afternoon.”

The episode’s celebrity judges were Jamie Farr (“Klinger” from M*A*S*H), comedian Freeman King, and show regular Jaye P. Morgan. “We did ‘Tutti Frutti’ by Little Richard. While we played, Jamie Farr got up and had ahold of Morgan’s feet and was gyrating them, while she was down on the floor [on her back] kicking them up in the air. King was throwing his hands over his head and boogying down. It was total mayhem, but it was over in one minute and 30 seconds.”

Four Eyes split in 1990, though DeCerbo continued to perform and record. In 1994, he taped an album for Bizarre/Straight Records, Baby’s Not in The Mood. That same year, he taped a new version of Four Eyes "Contagious" for a kitschy, but still kinda cool, ABC-TV Movie of the Week, Mike Hammer: Come Die With Me, even making a brief appearance during a bikini contest scene.

The seeds of Four Eyes' return were sown in 2005 with a compilation record released by Japanese label Wizzard in Vinyl Records, called Four Eyes Featuring Mark DeCerbo. A new album by Mark DeCerbo & Four Eyes, Sweet on the Vine, was released in August 2005 on Zip Records. Besides DeCerbo, the lineup at the time featured Lee Knight (vocals & bass), John Chatfield (vocals & guitar), and Larry Grano (vocals & drums). Another album was released in 2006, Look See.

In early 2020, a Spanish compilation debuted, The San Diego Underground Files from Spain’s Bickerton Records, collecting unreleased demos and rare tracks from local bands of the late 1970s and early 1980s. Four Eyes was among the featured bands, as well as Manual Scan and the Event. The albums were made available digitally or on deluxe 10-inch colored vinyl with inserts and posters and extensive liner notes by Manual Scan frontman Bart Mendoza.