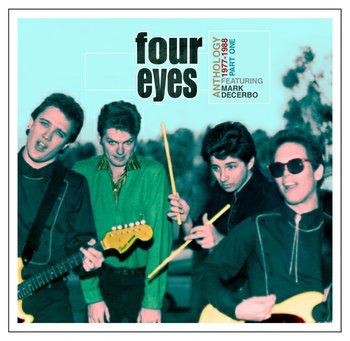 It's criminal, really. At a time when many acts on the radio couldn't write a receipt, let alone a tune, here we have a largely untapped embarrassment of riches, spanning the breadth of the eighties. Four Eyes: Anthology 1977 – 1988 tells the tale in 22 songs. Check the album for recording sessions with Greg Kihn, demos and an unreleased album for MCA, demos for CBS, and more.

It’s easy to see why all the interest - amongst the gems here are some of the most memorable melodies you're ever likely to hear. Spanning a decade, you get powerpop at it's best, with a heavy emphasis on the pop.

You're gonna hear echoes of this and that - 20/20, Phil's Seymour and Spector, Elvis Costello, Squeeze, and the Beatles. It all means a dedication to song craft, as well as a guaranteed heartfelt performance. Some songs pound out their message, others sweetly inform. Why this music hasn't reached a larger audience is beyond reason, but front man Mark DeCerbo continues to write and perform incredible pop material - witness his terrific Zip Records releases, Sweet on the Vine (2005) and Look See (2006) as well as more than a dozen compilation album appearances in the past decade.

In the meantime, in a career as lengthy as this, there's a lot of ground to cover. A cursory look would show us that Four Eyes themselves got their start in San Diego circa 1976 as a country boogie band, quickly mutating into a power pop group called Copenhagen. Before the end of the decade, the band became Four Eyes and that’s where our album begins.

One of the most popular San Diego bands of the era, they released a single, “Penny Pong/Disengaged” in 1980 and soon were drawing major label attention. They were courted by several majors over the decade, but ultimately no releases emerged. However, numerous tracks were recorded, leaving the incredible aural souvenirs comprising this collection. The band split in 1990.

In the ensuing years, front man DeCerbo has continued to perform and record. Amongst other highlights, in 1994 he taped an album, Baby’s Not in The Mood, for Bizarre/Straight , several of the songs showing up here in earlier versions. That same year he taped a new version of Four Eyes "Contagious" for a kitschy, but still kinda cool, ABC-TV Movie of the Week, Mike Hammer: Come Die With Me, even making a brief appearance during a bikini contest.

Four Eyes regrouped in 2001 and can once again be found performing on Southland stages with occasional forays into the studio. Still an incredible live act and still cutting great tunes, it is nonetheless unfortunate that the band never achieved it's due during their original lifetime. However, we are very fortunate that these great tunes have been preserved for future generations and are finally seeing the light of day.

That these songs still sound fresh and vital, after decades, is a testament to both the great songwriting as well as ace musicianship. With a little bit of luck, look for another collection of outtakes and rarities from Four Eyes in the near future - we're just displaying a small fraction of what’s in the vaults. If you're a fan in the slightest of great power pop, rock 'n' roll, or simply songwriters who knows their way around a tune, then the 22 tracks found here represent a treasure trove of amazing proportions.