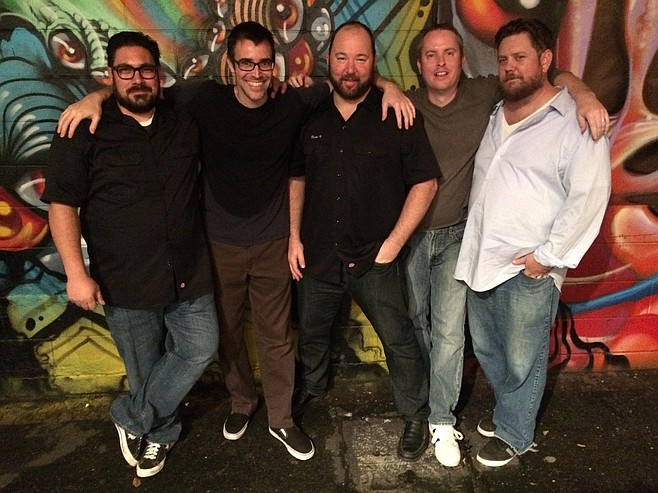 The title track of their Hillbilly Bomb Shelter album, due February 1, is "about a couple of hillbillies who stumble across a bunch of old underground bomb shelters," says Matt Rhea. "They decide to fix up the bomb shelters and sell them to doomsday believers. Dave Talbott painted the album art and kept the theme going from our last two releases."

The intellectual composition of Oingo Boingo and Talking Heads and the ska mischief of the Specials and English Beat. Manganista somehow has the ability to dabble in countless musical genres and come up with a sound that can only be described as "Manganista."

Rock music with an island vibe, a ska band on steroids, or a new wave band that ran into the Beach Boys while vacationing in Cambodia.

Manganista's debut full-length CD release, I Make You Look Like Movie Star, was produced by Lee Knight of Mark Decerbo and Four Eyes and Joey Harris and the Speedsters).

The late great Buddy Blue wrote in a 2006 Union-Tribune article about the band, "Musically, the group can conjure pure hellfire." The San Diego Song Writers Guild wrote in a newsletter, "An exciting blend of electronic and acoustic elements combining into a sound that had everyone who saw their set transfixed."

When the band chartered a “party bus” for a gig at L.A.’s Viper Room in June 2007, they utilized the trip to do a little recording. “I wanted to record a crowd of about 30 or 40 people singing the last chorus of our song ‘Turn Back the Clock,’” says singer Matt Rhea. “The potential bus noise, balance issues, and organizing 40 drunk people to do anything seemed like a tall order. Our producer printed a rough mix of the song and I dumped it on to my portable 8-track recorder. I grabbed the recorder, two boom stands, two mics, and two pairs of headphones and set up shop in the middle of the bus, using one of the stripper poles for balance. We printed lyric sheets and [keyboardist] Travis brought his accordion to provide the pitch and for guiding the crowd. It went surprisingly smooth, so we did a couple of takes and it was a done deal.”

The band charged bus riders $45 each, which included a show ticket. “At the club, I spotted our lyric sheets in the crowd, so a lot of them were singing along. That ended up being the highlight of the show…afterward, we found a 300-plus pound man passed out cold in his own vomit across the Viper Room bathroom floor. Three or four security guys dragged him across club’s floor and dumped him on the Sunset Strip pavement, smack dab where [one-time club co-owner] River Phoenix had died. That was our cue to get the hell back to San Diego.”

In summer 2011, a single called “Dimension” was made available for purchase through Facebook and Reverb Nation. They played their first gig in three years January 28, 2012, at the Picture Head La Mesa band compilation release party at Pete’s Place. At that time, Rhea and Manganista bassist Travis Wingo also played together in No Reply.

A new single and video for “Old Grey,” intended for the album Shooting at the Big Bang Seams (on Matt Rhea’s Quasi Recordings label), was released in early 2013, though the album itself wouldn't arrive for quite awhile.

Shooting at the Big Bang Seams was finally released in 2016, preceded by a single for "Five Weeks" and made available on CD, vinyl (black or translucent orange), and digital download.

“The album took over eight years to complete,” says Rhea. “What seemed like a good idea four or five years ago didn’t always stand the test of time when we were making decisions about the idea years later.” The stop-and-go sessions included multiple band hiatuses. “We recorded in three different living rooms, a garage, bathroom, bedroom, a church sanctuary, and a makeshift home studio, which was kind of our project headquarters.

2017 saw the release of a split 7-inch single featuring Unsteady’s song "Liar" and a new Manganista track, "Mr. Who," pressed on randomly colored vinyl to make every record unique and sporting a cover by Dave Talbott, who did the Shooting at the Big Bang Seams cover. A video was produced for "Mr. Who."

A new single debuted in Autumn 2018, "Bad Reggae," recorded and mixed by the band's German friend Lance LaFave (of local band Warsaw) and mastered by JJ Golden. A video was shot in Kauai and completed in La Mesa.

In early 2019, Rhea told the Reader “We’re finishing up a new record called Hillbilly Bomb Shelter. Lance [LaFave] from Warsaw recorded it at K Street studio before he moved to Germany. Right now, we’re dropboxing mixes back and forth and hope to have the mixing wrapped up in the next month or so.”

Released in February 2020, "The title track and album title came out of a conversation I was having with my dad years ago," says Rhea. "I can’t remember the details at this point, but we were talking about Missouri where my grandparents grew up, and underground storm shelters, yada yada yada, my dad said 'That would be like a hillbilly bomb shelter.' I thought it had a nice ring to it so I wrote a song about a couple of hillbillies who stumble across a bunch of old underground bomb shelters. They decide to fix up the bomb shelters and sell them to doomsday believers."

"Dave Talbott painted the album art and kept the theme going from our last two releases. HBS has some double meaning happening in the song so it was a pleasant surprise to see that Dave weaved his own double meaning into the artwork."