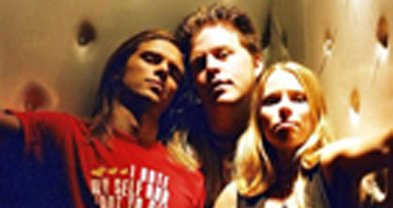 Magnuson gets its name from singer/guitarist Greg Magnuson, who also surfs and makes his own instruments, and his wife, singer/guitarist/drummer Kyrsten Magnuson (formerly Kyrsten Hopkins). Members say even their dreams are about the band.

“I dreamed I was playing onstage and I was really confused because the song I was playing didn’t seem to be the same song the rest of the band was playing,” says bassist Kyrsten Hopkins. “When I looked over at the other band members, I didn’t recognize them. Turns out I was so excited about playing the show that I jumped up onstage with the band [playing] before us.”

“I had one dream where the stage broke from under me,” says Chula Vista native Matt Guthrie, the band’s former drummer. “And then, the very next gig at Brick by Brick, the light fixture fell and hit me.”

Their 14-track album Crash of Cassini was released in July 2011. Around the same time, Greg Magnuson appeared on the ABC TV show Happy Endings, playing a singer/songwriter named Royston Summers.