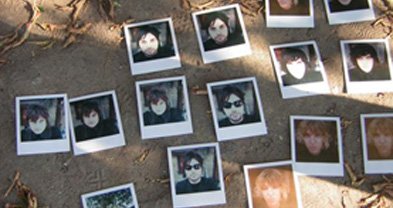 Louis XIV formed in April 2003 from the ashes of the band Convoy. In January 2005, the Illegal Tender EP -- self-released on their own Pineapple Recording Group label -- spawned the radio hit "Finding Out True Love Is Blind."

Their first album, The Best Little Secrets Are Kept, was released in March 2005. The first single "Finding Out True Love Is Blind" was featured on both the EP and album. The second single was "God Killed the Queen."

Local singer Lindsay Troy sings backup on "Finding Out True Love Is Blind." "I met them a year and a half ago at a Casbah show," she says. "That's when they were just writing the song. They asked me to record the part." Troy appeared with Louis XIV March 26, 2005, at their sold-out Soma show, but she does not tour with the band. She said guitarist/pianist/vocalist Brian Karscig usually handles her high parts on the road.

Rolling Stone named Louis XIV one of their "10 Artists To Watch in 2005," while Entertainment Weekly included them on their shortlist of "8 Hot Bands." Esquire listed Best LittleSecrets as one of "Four Records To Get You Ahead of the Game," with further rave reviews running in such national publications as the New York Times, Blender, the Los Angeles Times, and the New York Post.

The band made a series of network television performances, with live spots on ABC's Jimmy Kimmel Live and NBC's Late Night with Conan O'Brien and Last Call with Carson Daly.

The band's performance after an August 28, 2005, high school football game in Birmingham, Alabama, was to be televised on ESPN. When parents got ahold of The Best Little Secrets Are Kept CD and found a naked woman on the cover and explicit lyrics within, they complained to school administrators.

The school contacted Old Spice, the event sponsor, whose contract with ESPN allowed for their approval of entertainment. On August 24, school principal Sandra Spivey told an NBC affiliate, "We have been assured by the concert promoter that the band's performance this Saturday will be appropriate for a high school audience." The next day, Louis XIV was replaced by Four on the Floor, a Birmingham band.

Louis XIV spent much of 2005 and 2006 touring North America, Europe, and Asia as headliners, festival show-stealers, and special guests to such like-minded outfits as Hot Hot Heat and the Killers. The band capped off its endless tour in mid-2006 by sharing the stage with David Bowie and Alicia Keys at the Keep a Child Alive Foundation's annual "Black Ball" fundraising concert at New York City's Hammerstein Ballroom.

In early September 2007, they released a new digital LP online, The Distances from Everyone to You, with three new songs plus a cover of Queen's "Flash's Theme," featured on the Sci-Fi Channel TV series Flash Gordon. In concert, they have a fifth bandmember in local violinist, violist, keyboardist, guitarist, and harmony singer Ray Suen, of the Exfriends with Gregory Page.

In May 2008, occasional violinist/mandolin player Ray Suen became a permanent member of the Killers.

Armbrust turned up in Summer 2009 with a new band, Rats Eyes, alongside John Cota (formerly of Hostile Comb-Over), Jason Blackmore (Sirhan Sirhan), and fronted by Gabe Serbian, drummer from the Locust.

Around the same time, Brian Karscig and Mark Maigaard turned up with a new band, the Nervous Wreckords. Karscig said on his MySpace page "Louis XIV started to feel more like a business than a camaraderie, and in that, the music started to suffer and started feeling uninspired...It just felt right to walk away now and to pursue an uninhibited creative outlet, was the right thing for me to do as an artist. Making music should never have to be a forced thing, or a chore."

Louis XIV played a reunion show on March 10, 2011, at Fluxx, with Lesands and Hot Moon also on the bill. Then, in 2012, “After a three year hiatus,” says Brian Karscig, “Louis XIV will re-emerge this New Years Eve weekend, December 28th - 29th, with the Killers at Cosmopolitan’s new Chelsea venue in Las Vegas, Nevada.”

The reunited glam rockers then supported the Killers for a European Return of the King tour, running through March 2013. On returning home, Maigaard returned to bartending at Small Bar in University Heights.