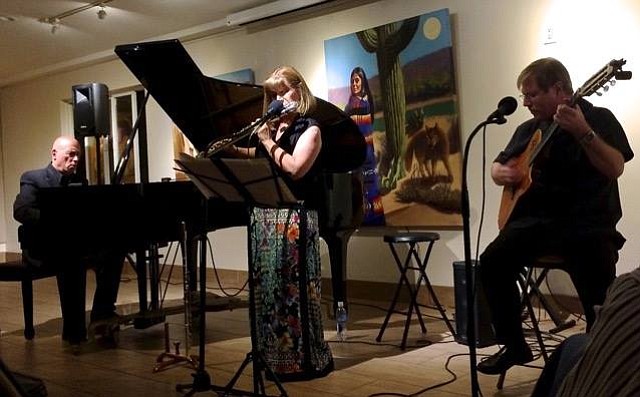 Though best known for her flute playing, jazz composer Lori Bell actually began her musical career as a guitarist. “I started on guitar at four and played seriously until I was sixteen,” she recalled. “Then a wind player friend of my fathers, Richard Swink, came back from a tour and brought a flute home. I was over there playing him some originals on guitar. The flute wound up in my hands and never left.”

Bell records as a solo artist, as well as recording and performing with the Lori Bell Trio. An unusually versatile musician, Bell can navigate the intricate harmonies of bebop, explore the sensual rhythms of Brazilian music or flirt with the edges of the "extended-techniques" of more modern jazz. In addition she is well versed in classical music, having played eight classical recitals in the last year. " I love playing classical music, because it keeps my on my toes, and gives me inspiration for improvising," she says.

A touchstone in the San Diego jazz community for many years, she initially made her local presence known in the 1980s with her contribution to the Peter Sprague/Dance of the Universe record The Space Between Two Thoughts.

Her first national exposure came on a Dave Mackay release Love Will Win (Discovery Records) with Mackay on piano and Andy Simpkins on bass, which earned a four and a half star (out of five) rating from the iconic LA Times jazz critic Leonard Feather, and made the Grammy list for Best New Artist.

Her self-titled 2002 full-length on Beezwax Records features veteran LA pianist Dave Mackay, Kevin Hennessy on bass, Ron Satterfield on guitar/keyboards, and Duncan Moore on drums. It featured four or her original tunes, and was arranged by Bell as well.

In 2008, Bell signed a multi-album deal with Resonance Records. Her subsequent full-length The Music of Djavan, paying tribute to the Brazillian songwriter, was nominated for Best Jazz Album at the 2009 San Diego Music Awards.

Bell has been nominated for several Grammy Awards, including Best Contemporary Jazz Album, Best New Artist, Best Instrumental Composition, Best Instrumental Arrangement, and Best Jazz Instrumental Solo. In 2011, she received an Award Of Excellence from the GMA, (Global Music Awards), a group that gave her another award in summer 2014.

"I found out about it, (the award), from the faculty at SDSU, who encouraged me to apply, then from I got a letter from GMA saying I won! I've been getting phone calls ever since," says Bell.

The award is for composing and arranging, and Bell used her 2002 release on Beezwax Records, Lori Bell for the application, because "it featured four original tunes, and I did all of the arranging."

The La Jolla venue also hosted a reunion of Bell’s group Interplay, which includes pianist Dave Mackay and Ron Satterfield, in November 2013. It was as a member of the Dave Mackay Trio that Bell released her first recordings in 1983.

Brooklyn Dreaming earned a place in the top jazz recordings in both Downbeat magazine and Huffington Post’s “Best of 2016 Jazz Albums,” despite the fact that she severed ties with her record label and released it on her own. “It was a personal project, all about my family and my folks, so it’s sweet that it’s gotten some recognition.”

Making the record without label support involved some inherent risk. Bell had been hooked up with Resonance Records, which has released historical projects from Wes Montgomery and Bill Evans. Even though she recorded the project at their studio in Los Angeles, Bell decided to go her own way.

Her 2017 album Blue(s), recorded with Ron Satterfield, is a 9-track opus including straight ahead blues and songs with "blue" in the titles. "We recorded three of my originals and wrote arrangements for six jazz standards," she says. "We were warming up on new blues heads and I got the idea after hearing back the rehearsal tape. We went ahead and used first takes from that rehearsal, not realizing we were making a new album. At the next session, we tried keeping that loose, first take vibe. Some of the other tunes had more than one take, but we were recording two-track live, so no overdubs."