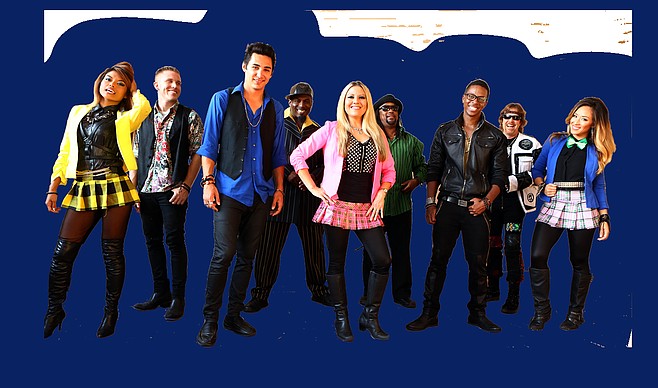 Sound description: An exotic fusion of western pop melodies with ancient and modern eastern elements and socially conscious lyrics, along with covers of classic protest songs.

Liquid Blue is an independent recording and touring act based in San Diego. The nomadic eight-member ensemble has performed in more than 100 countries on seven continents, playing over 2000 shows in over 400 cities. In 2002, they played before 65,000 people in China during a televised music festival.

In 2005, they became the first American act to be signed by a major Chinese record label, when they signed a distribution deal with Shanghai Audio and Video, the biggest music publisher in China. The group represented the United States at the CCTV kick-off concert for the 2008 Summer Olympics in Beijing, performing at the China Agricultural University Gymnasium, the site of the Olympic wrestling competition. The Olympic kick-off concert was televised throughout China on CCTV and drew a sell out crowd of 8,300.

Liquid Blue includes Scott Stephens (former pro roller derby skater for the L.A. Thunderbirds) and guitarist Michael Vangerov aka the Grovler (who has his own Neal Moser signature guitar), as well as the dancing and singing BlueGirls who front the band with Abba-esque enthusiasm, currently including Layla Loxa and Nikki Green.

The band is very active on social issues, focusing on world peace, human rights and the environment. Says Stephens, “Our lyrics show we are an American band thinking about world issues...[we] focus on issues like human rights, seeking peaceful solutions to conflict, the rape of the environment, finding inner peace, etc.”

Twice, the group has finished runner-up for Best Band at the International Music Awards (2006-2007) and was also named America’s Best Independent Artist (2004-2005). The band were San Diego Music Awards nominees for five straight years (2001 to 2005), taking home an award in 2002. Their full-length Supernova was awarded Pop Album of the Year in 2009 at the Los Angeles Music Awards.

In 2010 Vocalist Nikki Green became the first American to qualify for the finals in Chinese Idol. To top things off, Liquid Blue has been certified as a green business.

In late 2010, they earned a Guinness World Record® for their song “Earth Passport,” for Song Sung in the Most Languages, as it was sung in more languages than any other song ever to hit the Billboard Charts. All six official United Nations languages were used in the recording, plus three others. The song hit number three on the Billboard Hot Dance Singles Charts and number twelve on the Billboard Hot Singles Sales Chart in mid-October.

Band alumni include Sony recording artist BC Jean, who started her career with Liquid Blue in 2003 and was subsequently signed to a recording contract by Clive Davis, as well as writing songs for Britney Spears and others.

In summer 2012, they won a Biz Bash Los Angeles Readers Choice Award for Entertainment Act of the Year. They performed at the opening kickoff for the Democratic National Convention in Charlotte, North Carolina on September 1, 2012.

On April 20, 2013, they backed up Sammy Hagar at the Bishops School in La Jolla. An album of covers called Peace Anthems was followed in 2015 by a followup, Protest Anthems, which samples George Bush and contains the original song "Dominate."

The band's 2017 album Top Tracks contains sixteen songs, one from each of the band's full-length LPs, featuring original compositions and covers.