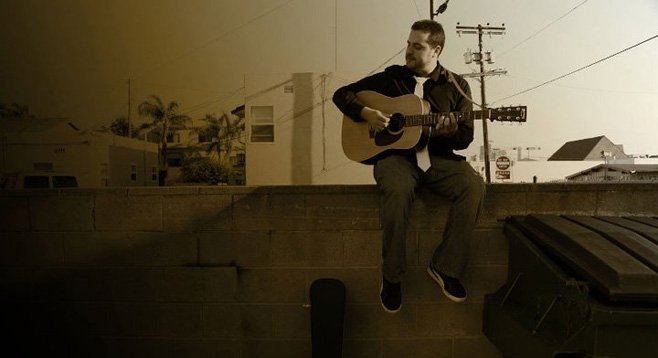 Based in La Mesa, singer/songwriter Lenny Morris III began singing at age five. When his cousin handed him an old Harmony guitar around his 12th birthday, his passion for guitar and songwriting quickly grew.

“I’ve managed to generate a very sustainable income in less than a year as a full-time musician,” says Morris, “playing three to four shows a week for private events, upscale restaurants, and wine bistros.”

Until April 2011, Morris wore a paper hat and apron at In-N-Out Burger. “I was laid off three times, from three jobs in three years. I accepted a paltry position and hourly pay at In-N-Out after I became desperate.... My starting pay was $10 an hour. I was there for two years and became miserable. I realized I could make more money working a fraction of the hours doing what I love to do.”

He began playing solo acoustic sets for Listen Local showcases at House of Blues and the Stage Bar and Grill, as well as landing a Wednesday residency at Mosaic Wine Bar. “The more free I was during the day, the more time I had pounce on opportunities by answering and writing emails, making calls, and [self-]marketing. I usually spend time online finding new restaurants or venues that might not have music.... Since I designed and run my website daily, and my calendar is always updated, it helps to have a full calendar when trying to convince an upscale restaurant to pay you.”

He says intensive follow-ups have been the key. “Music is probably the last thing on a restaurants priority list, so sometimes it takes ten classy and nonabrasive calls or emails to get someone to take notice. Plus, most restaurants and private events require you to provide your own sound. I have a PA system that works for anything as small as a house reception to a large venue.”

He released his debut acoustic EP Lenny Morris Music in November 2010. His band Lenny Morris and the Native Tongue (aka TNT) debuted March 12, 2011, at IndieFest 7, held at the NTC Promenade at Liberty Station.

“I think there’s kind of an ‘indie’ attitude that limits people. I’ve been criticized simply because I make good money playing music for private events and restaurants. But I’m able to comfortably pay my bills. I don’t think a lot of people have the patience for the business side. Most musicians just want to play music.”

In late 2011, Morris began recording a sophomore album No Secret, as well as launching a Johnny Cash and June Carter tribute project. He launched a Kickstarter campaign to raise funds for recording it.

In early 2012, Morris told the Reader “Jolt ‘N’ Joe’s downtown cancelled all entertainment, which included every band night and a comedy night.” The move ended his residency at that venue every other Wednesday, inspiring the launch of a new free weekly Saturday night event at downtown’s Hard Rock Cafe. Lenny Morris and Friends debuted February 4, 2012, with local acoustic guitarist/songwriter Ben Varela and pianist John Intrabartolo.

The La Mesa–based troubadour and promoter said the Hard Rock restaurant, wearing its rock ’n’ roll pedigree all over the walls, doesn’t host enough concerts. “I’m just trying to start a new concept, whereas people will get me serenading them for three hours, for free, as well as a couple of talented guests playing sets, in a family-restaurant setting. I’m not trying to compete [with other live music venues], but there aren’t many places downtown with delicious food, great drinks, a wonderful staff, a variety of live music, and no cover charge.”

In summer 2012, his Hard Rock Cafe local band series was extended through the end of the year, and he landed a new residency at Hacienda Casa Blanca in El Cajon every Tuesday night for Taco Tuesdays. By 2014, he'd also held down residencies at Gordon Biersch Brewery, Hooleys’ La Mesa, Hennessey’s La Jolla, Hennessey’s Carlsbad, and "I’ve done dozens of private events, ranging from Weddings and engagement parties, a few private parties for the San Diego Padres Organization and some corporate gatherings."

He often performs and records with Wil Forbis (guitar) and Christopher Rubio (percussion). "We’ve routinely had other musicians rotate in, depending on what is needed and what type of gig."

In early 2020, Morris announced "It's a clear departure from my escapades as a freelance acoustic songwriter, as I have now focused on a career writing carefully crafted lyrics with messages I hope to resonate with the masses." His new hip-hop single "Dear World" was released on all platforms, with a video on YouTube as well.