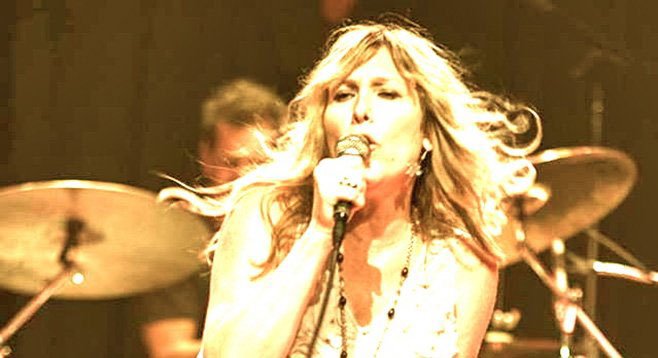 Raised in Point Loma, country rocker Lacy Waldemar, aka Lacy Younger, signed with Hyena/Big Deal Records and released Still Wild, produced, recorded, and mixed by Val Garay. “When the economy tanked, the label downsized. For a couple of years, I was pissed off and bummed. I couldn’t get it going. I almost lost everything.”

She bounced back with her album Live, the Way You Like It, released in 2013. She won a Jim Beam international songwriting contest and, in 2014, was nominated Singer/Songwriter of the Year at the San Diego Music Awards.

Her music can also be also heard on the first two volumes of the compilation CD series she produced, Voices From The Heart, from which proceeds go to local charities like Just In Time For Foster Youth, which raises funds for young people in San Diego and Point Loma. "It helped raise a lot of money and garner new advocates for the foster youth program," she says.

Volume one of Voices From The Heart included her tracks "What You Make" and "Heart of Mine," along with songs by Soul Plow, the Deblois Mileage Band, Tony Suraci, Martian Horses, and more. Volume two, which she also produced, featured her song "Still Can't Believe," as well as tracks by Steve Poltz, Lady Dottie & the Diamonds, AJ Croce, Astra Kelly, Tolan Shaw, and others.

2016 saw the release of two new solo singles, "For The Record" and "Spring." The following year, she launched a duo with DeBlois Milledge called the Blonde Bombers, releasing singles such as "California" and "Just the Whiskey."

Younger is also a writer whose first article, "One More Time, With Feeling," was published in iSing Magazine in early 2017. She also self-published her children’s book Cake, which she describes as “a story about cookies, cake, and treats, and how they relate to a boy and his cat, who just so happens to be named Cake. I wrote it in honor of my son Dillon, who is now grown, and our cat Cake...it’s written in rollicky rhymes.”