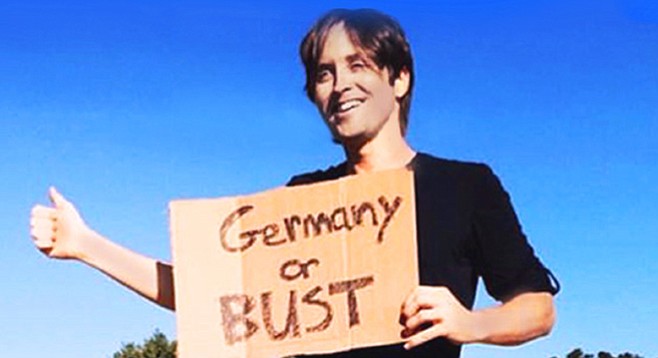 Musicians kick out the books

"I wrote it in honor of my son Dillon and our cat Cake."

“I work eight hours a week for a yoga studio, but the rest of my money is currently made playing music on the streets, in venues, and selling my first book,” says Martin Stamper, aka Fast Heart Mart, one of several local music pros moonlighting as authors.

“European Music Tour with Fast Heart Mart is a compilation of all my journal entries from the tour I did in summer 2016. I was mostly in Northern Germany, Hamburg, Berlin, Koln, Frankfurt, Belgium…. I did about 23 shows in 23 days over there, racking up 4500 kilometers on the Autobahn in my tiny rental car.” Stamper sells the book at shows, as well as online.

Tristan Luhrs from Country Rockin’ Rebels is self-publishing his first book next month. “Planet California is a part-autobiographical, part-sci-fi novel about a guy who drops out of college at the University of Minnesota and flees the cold weather to live out his dream life as an artist and author…. The bulk of the story takes place in San Diego, as ‘Tristan’ transitions from innocent table-waiting Midwesterner to pot-dealing surfer.”

Lacy Younger wrote and illustrated her children’s book Cake, which debuts digitally on Amazon July 20 and in a hardcover edition in September. “Cake is a story about cookies, cake, and treats, and how they relate to a boy and his cat, who just so happens to be named Cake. I wrote it in honor of my son Dillon, who is now grown, and our cat Cake…. It’s written in rollicky rhymes.”

C.A.A. Allen, aka hip-hop manager and promoter 40Oz. Chris, describes his first book The Cave Maze: Wizard Warrior Quest, as “The Hobbit meets The Hunger Games in the World of Warcraft. The concept has been simmering around in my head since seeing David Bowie as Jareth the Goblin King in that movie Labyrinth.”

Available via Amazon, the novel includes one locale inspired by a long-closed San Diego nightclub. “The Bacchanal gets transformed into a place called King Heads Crooked Billet Inn, a smoky pub alive with questers, mercenaries, locals, and prostitutes drinking, gambling, and breaking into spontaneous song.”

Great book. After 22 years on the road this must be only a small sampling of the great adventures you have encountered both here and abroad. Give us more!

Thanks Willie Gene! Will do :)