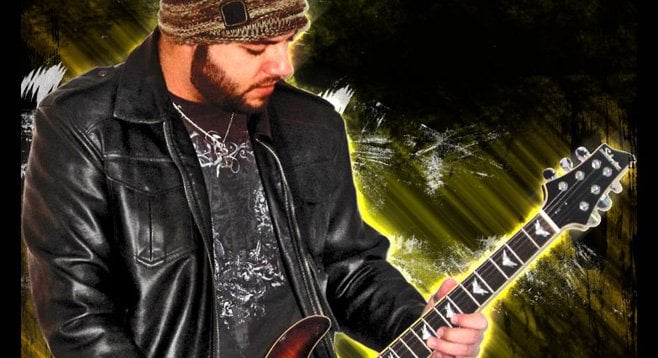 Jon Goodhue hails from Gloucester, Massachusetts. A longtime guitar player and vocalist, he spent time in several bands before working on a solo project, whereupon he moved to San Diego and formed the Jon Goodhue Band.

Logging so much time onstage (he also plays with Thrillrazr and various cover bands), there are bound to be occasional crappy nights. “At one gig, my band was told to play all night, but there was nobody there when we were about to take the stage. About five songs in, the place became packed with people. Eventually, there was over a hundred [people] there.”

“When we were about to take the stage for our second set, the manager told us that their DJ was going to play for the rest of the night...my thoughts are they just didn’t want to pay us the bar sales they promised us.”

A debut album Release Me came out in 2008. His sophomore record Flux was released in June 2011.

By the end of 2011, P.O.D. bassist Traa Daniels was recording a new EP with Goodhue called All In, performing bass on the tracks as well. Other guest players include L.A. based drummer Nick Adams (Life Down Here), and the EP was mastered in L.A. by Precision Mastering (STP, Nirvana, Alice in Chains, etc.).

Released in summer 2012 (digitally and on CD), All In has five songs, with a sixth available via download-only, “Eating Me Alive.” Says Goodhue, “Traa was extremely happy with the way the tracks came out and is promoting it on the road as P.O.D. tours the U.S.”

Working with Buddha Music Management (Marc Devoe & Katie Plomgren), Goodhue says “We spent the past seven months putting our all into this. We titled the EP All In to represent our dedication into this project.”

The EP cover was designed by Goodhue and painted on canvas by Oceanside’s Corey Burson. “The album art contains symbolic meanings about myself, including the Man At The Wheel, a symbol of my hometown of Gloucester, my tattoos symbolizing family, my guitars, images of my past releases, and more.”