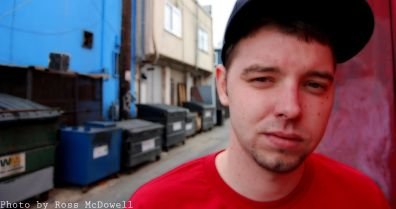 Jimmy Powers was born in Boston, went to grade school in Houston, and was shipped back to Boston before landing in San Diego with the United States military. After his enlistment was up in 2004, Powers began fronting the trio Clay Pigeons in 2008, working and forming fast bonds with established artists such as Slaine & Big Left of La Coka Nostra, Blame One, Copywrite, Randam Luck, Kutfather, and others.

"I am an active member on the front lines of the growing San Diego hip-hop scene," says Powers, "as well as an established event promoter. Hip-hop does not always need to be viewed in a negative light. I have planned, organized and managed around 20 live music events this year without incident at numerous venues throughout the city, with turnout ranging from 75 to 200 people."

After a group fallout with Clay Pigeons, Powers decided to concentrate on a solo career. His album Califoreigner includes contributions from San Diego hip-hop artists Blame One, Slaine, Copywrite, Randam Luck, and others, with digital distribution handled by Foundation Media.

In late 2010, UFC fighter Kenny Florian -- at the time ranked 6th lightweight in the world -- proclaimed himself on Twitter as an avid fan of Powers.