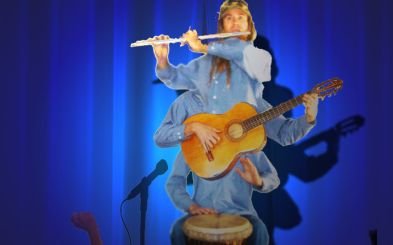 Born 1979 in Denver, Colorado, Jason Chase started studying world music when he moved to Los Angeles at the age 18. Starting with Spanish gypsy guitar and Irish tin whistle, he also learned to play the West African Djembe drum. His studies led him to music and cultural centers such as Bantaba in Boulder, and the World Beat Center in San Diego. His musical evolution later involved looping live acoustic instruments from around the world into a full sounding audio experience, and developing live shows featuring tribal roots and culture.

“My one goal,” he says, “is to utilize the power of music to deliver an experience that both entertains and spreads the light of knowledge and peace to as many people as I possibly can in my lifetime.”

Since 2002, Jason Chase played with Kuumba Dawa, Mothership Earth, Los Able Minded Poets, and several other local acts. He served as a world musical accompanist at SDSU and has been teaching music in area schools and studios since 2007.

“That is what makes these times so exciting,” says Chase of the local music scene. “There is a chance for us as musicians to actually put this town on the map musically.”

According to Chase, “The Jason Chase Trio features the combined forces of skin, wind, and string to create a world roots and culture groove that ties together tribal sounds from around the globe into one compelling and original performance of trance-dance, wild meditation-music. The music jams out the ancient ceremonial, spirit filled vibes of the medicine man and the shaman, in a modern and up-beat groove style.”