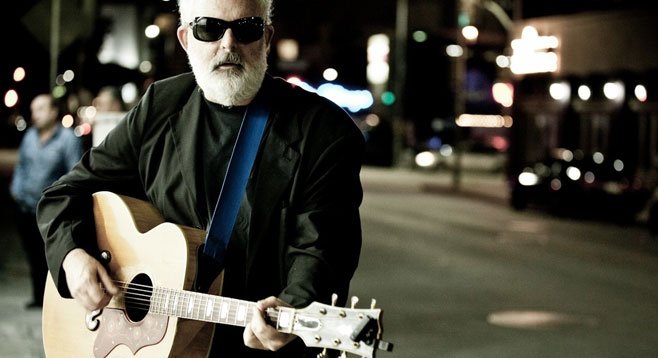 “I’ve lived in San Diego all my life,” says singer-songwriter Jack Tempchin, who was nine months old when his parents moved from rural Ohio, “and I consider it my city, although I don’t mind sharing it with a few million people.”

Before writing songs for the Eagles and others, Tempchin lived in Banker’s Hill in 1970 through 1971. He often performed at a Mission Beach watering hole called the Heritage (where, for a time, Tom Waits manned the door).

In 1971, Tempchin managed SDSU’s Backdoor theater, where he and famous former neighbor Tom Waits wrote the song “Tijuana” together minutes for debuting it onstage.

While eating lunch one day at Der Wienerschnitzel on Washington and First in Hillcrest, inspired by “two pretty girls walking by,” he began writing the lyrics to “Peaceful Easy Feeling” on the back of a concert flyer.

“Peaceful Easy Feeling” not only turned out to be his biggest earner, but one of the top ten earners of all time. Eagle solo-flier Glenn Frey had a hit with Tempchin's "You Belong to the City."

"Peaceful Easy Feeling" and "Already Gone" both appear on the Eagles' album Their Greatest Hits (1971-1975), which has sold 27 million copies, making it one of the ten best-selling albums ever, according to the Recording Industry Association of America.

When the Eagles reunited for a 2007 album, they used two of Tempchin's songs, "Somebody" and "It's Your World Now," for Long Road Out of Eden, their first studio album in 28 years. The record debuted at #1 on Billboard's Top 200 album chart when it was released in November 2007.

While living in Encinitas, Tempchin released a solo CD, Songs, which includes his new version of “Smuggler’s Blues,” co-written with Glenn Frey and featured prominently in the TV show Miami Vice in the ’80s. He self-distributes Songs through tempchin.com.

In 2002, he and fellow songwriters Jackson Browne and J.D. Souther sued the music-publishing company Warner-Chappell Music for underpayment of royalties they said they were due for four tracks used on the '71–'75 compilation. The suit asked for $10 million. When the case was settled out of court, Tempchin said he was "satisfied" with the confidential settlement.

With the arrival of the digital music free-for-all, Tempchin now wonders if the bonanza is over.

"A lot of people believe that the creators of music don't need to be paid anymore.... If people are downloading albums for free, no one is getting paid...through most of my life, the copyright laws were working and songwriters were getting paid. But now that's all changing."