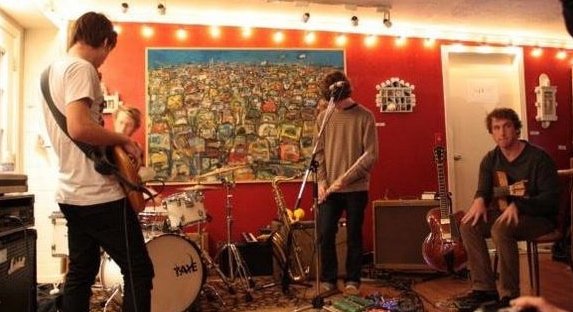 Sound description: Aims for a jazz-rock synthesis of elements from jam band and Afrobeat influences.

McNalley is the son of Joe McNalley, founder of the Hutchins Consort. Casey studied jazz and classical guitar at SDSU under Celin Romero and Peter Sprague. Wilson also plays in the rock band Birdhouse, while Harrison was in the punk band Wrecking Crew, as well as touring with the Adolescents and co-founding the New Archaic (named Best New Artist at the 2009 San Diego Music Awards) with Dillon Casey.

In December 2010, they released The Barefoot Race CD. A subsequent west coast tour found them temporarily renamed the In Motion Trio+2, with Joe Harrison and keyboardist/percussionist Evan Penza.

As of 2011, Jeff Wilson and Evan Penza lived in Santa Cruz and play with bluegrass bands, while saxophonist/flutist Joe Harrison lived in Boston and studied jazz guitar at Berklee College of Music. While on school breaks, Harrison occassionally rejoined the band, as when they played they Ché Cafe at UCSD on January 15, 2011.

In August 2011, they won Best Jazz at the San Diego Music Awards, despite being up against longtime older vets like Gilbert Castellanos. 21 year-old Harrison attended the ceremony before returning to Berklee in Boston.

Sax/flute/percussion player Joe Harrison took a long 2012 President’s Day weekend away from studies at Boston’s Berklee College of Music to travel to Bogota, Colombia with the Adolescents, having been their touring guitarist since age 15 with many U.S., European and Japan tours over the past few years.

As of 2013, the performance lineup is often large enough to be dubbed the In Motion Collective.