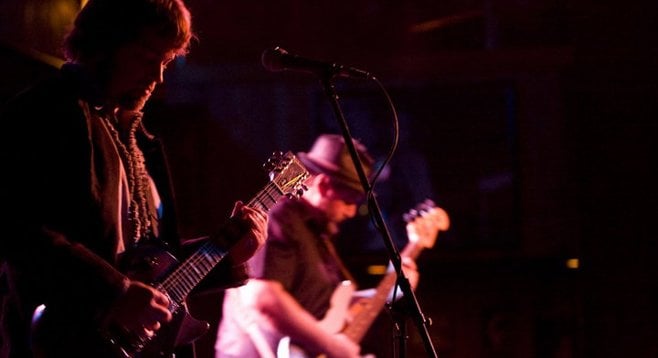 San Diego-born power-rock trio Heavy Glow was formed in August of 2008 by Jared Mullins, vocalist/multi-instrumentalist, and bassist Joe Brooks after the breakup of their first band. The trio set out to record their first EP at Velvet Revolver’s Studio in Los Angeles with legendary producer Stevie Salas.

Under the production of Salas, who has worked with such artists as Rod Stewart, Mick Jagger, George Clinton, Justin Timberlake, and T.I., the EP was recommended by San Diego radio station 94.9 KBZT-FM in June. Singles “It’s Too Late” and “Better Line” also receive regular airplay on San Diego stations 105.3 KIOZ-FM and 91.1 XTRA-FM as well as podcast play in Italy, Canada, and Germany.

The Heavy Glow says they have often been compared to the likes of The Black Keys, Cream, Queens of the Stone Age, and White Stripes.

According to Mullins, the band strives for “hard-hitting, gritty, infectious, and melodic rhythms to create a sound that is both informed by the past and undeniably modern.”

With the addition of new drummer Dan Kurtz, the band released a followup EP entitled The Filth and the Fury. The EP contains five new songs all cut with the band playing live in one room over a period of six hours. With singles including “Hot Mess” and “Love Ghost,” the EP was nominated Best Rock Album at the 2010 San Diego Music Awards.

In summer 2010, the track “Hot Mess” was included on a CD sampler distributed with an issue of Classic Rock magazine. In addition, their song “Grinning in the Dark” was heard on the Fox TV cop show The Good Guys.

In 2011 the band released their first full-length Midnight Moan, with nine new songs self-produced and independently funded by the band, all recorded in the span of a week and made available on cassette and via download.

In 2012, they began recording their sophomore full-length with Grammy-nominated producer Michael Patterson (Beck, NIN, Black Rebel Motorcycle Club) and Nic Jodoin (the Morlocks), in collaboration with Purge Records and PopAntiPop Records (L.A.). Near the end of the year, they released a new single, “Mine All Mine,” which Mullins says he wrote after touring an abandoned prison.

In late 2012, a new single was released, “Mine All Mine,” written by frontman Jared Mullins after touring an abandoned prison and set to appear on their sophomore full-length. The following summer, their first album Midnight Moan was re-released on CD for the first time, in an edition limited to 100 copies.

After landing their song “Headhunter” in the second episode of the 2013 Steven King miniseries Under the Dome, they toured (with new drummer Michael Amster) alongside Black Pussy, Mothership, and Cosmic Trigger, wrapping up August 24 in Cleveland, Ohio.

They spent February 2014 touring Texas, Oklahoma, Missouri, Arkansas, Kentucky, Tennessee, and Ohio, with a lineup of Mullins and Brooks, with studio drummer St. Judas replaced on the road with touring drummer Ryan Muller.

That June, they released their album Pearls & Swine and Everything Fine, produced by Michael Patterson (Black Rebel Motorcycle Club, P. Diddy) and Nic Jodoin (BRMC, the Morlocks, Nightmare Air) and featuring cover artwork by Darren Grealish. The album was recorded in Los Angeles at Studio 9, with a support video featuring actress Mayra Leal from the film Machete.

The release was followed by a summer tour, starting June 4 at the Soda Bar and wrapping up June 14 at Elbo Room in Chicago. At the end of 2014, their album Pearls & Swine and Everything Fine was released in a 180-gram vinyl edition, limited to only 100 copies pressed.

After relocating to Austin, Texas, the band released a video in 2015 for their song "Domino (Black Flowers)," directed by Jennifer Deutrom (the Melvins), and embarked on a U.S. tour running through August 15 (Norman, OK), before heading to Europe in October.