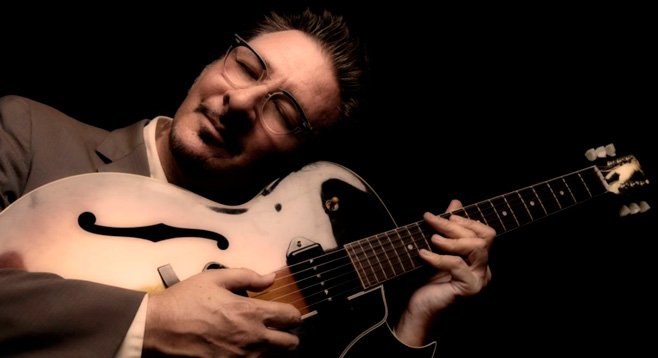 Sound description: The sound of one Rugburn clapping.

Gregory Page is everywhere. He has performed in a wide range of venues (London’s 02 Arena) and international music festivals (Woodford & Manly), having opened for the likes of Bob Dylan, Leon Russell, Judy Collins, Chris Isaak, and Jason Mraz.

If he’s not onstage singing and strumming, he’s behind a soundboard producing and recording. He has more than 20 albums out, from solo projects to compilations to his work with the Hatchet Brothers and the Rugburns. His music has been heard on the TV show Felicity and the movie The Big Empty.

Page’s mother Moy Page, a multi-instrumentalist, was a member of one of the first UK girl bands, the Beat Chics, who opened for two Beatle shows in Spain in 1965. “I was a small chap sitting on Paul McCartney’s knee,” says Page. “Mum knew all along I was going to grow up and become a musician.” He studied classical guitar at London’s Trinity College of Music.

“I am a full-time dreamer, and if dreams can come true then someday I hope to find myself in heaven playing music with my grandpa and John Lennon.”

His father, Krikor Hovelian, was a touring musician with the Martians, who spent part of the sixties among the Hamburg, Germany, beat-group scene. His uncle, David Page, is a drummer who has played with Tom Jones and Sinatra.

“My grandfather on my dad’s side, who passed away before I was born, gave the Guild to his daughter, which would be my Aunt Claire. He was longtime friends with Jimmy, and when his career started to fade, Jimmy began selling off his guitars,” Page recalled. The instrument was brought to America when the Page family moved to North Park in 1976. “It wasn’t a gift to me. It was a guitar that was always in the family, and I was the only one who ever really played it, so I ‘acquired’ it. I wouldn’t let it out of my arms. It was the one connection that I had to England at the time.”

According to research done on the serial number, it is the 125th guitar in the series made. Similar instruments have sold for up to $2000, not big money as far as vintage guitars are concerned, but it’s a priceless item to Page. The guitar has also been used on numerous sessions by other artists, including Jeff Berkley. As Page’s primary instrument, he has written the bulk of his material on it, as well as using it on stage and in the studio, including his new album, Shine, Shine, Shine. The music is a departure for Page, trading his trademark jazzy acoustic troubadour sound for a 22-piece big band, but the guitar still features. “It wouldn’t be the same if it wasn’t there,” he said.

Since Page’s first solo album in 1990 — Drawing Down the Moon — he has released over 20 more and appeared as a guest on dozens of others. He released another eight albums as a member of the Rugburns or the Hatchet Brothers, and he’s produced music for over two dozen artists, including Jason Mraz and Tom Brosseau.

In October 2008, Page announced his plans to retire as a recording artist. “After almost two dozen albums,” says Page, “I’ve said what I’ve needed to say…I’m tired of making records that I really believe in which go nowhere. It’s really disheartening.”

Page said his January 2009 album Bird in a Cage would be his last. He subsequently released a jazz tribute in September 2010, Once and for All, recorded by Jason Mraz, with whom he subsequently embarked on a tour of Holland. His first-ever concert in Amsterdam sold out The Paradiso Theater, while his album Promise of a Dream was released in Belgium.

In early 2011, a limited edition of his new jazz album My True Love was for sale for U.S fans only, to be officially released in Europe in mid-September. “I am making this album available for a short time on my web page,” said Page. “This new collection of positive original love songs recorded in the spirit of the 1940s is my finest work to date. It features some of San Diego’s and Orange County’s finest jazz musicians.”

A documentary film about Page screened at Lestat’s on June 17, 2011. Produced and released by the Snapshots Music and Arts Foundation, the footage was shot in La Jolla during a live show at the Athenaeum. Around the same time, recording original songs akin to 1940s big band music, he began raising money to finish the album via Kickstarter donations.

“I have two albums on the charts here, and inked my contract with V2 Records yesterday,” said Page on September 16, 2011, while on his third tour of Holland in just over a year. In August 2012, he won Best Jazz Album at the San Diego Music Awards. The following summer, he toured Europe, though illness forced several cancellations.

“An unfortunate illness of bronchitis & laryngitis has forced the cancellation of all my concerts in the United Kingdom,” Page posted on Facebook in May 2013. “After a cancelled concert in Belgium on Saturday night, at 4:30 in the morning I was rushed to a hospital after fainting with a fever of 105 degrees. I'm now recovering in Turnhout, Belgium with a week of rest and antibiotics.”

Page toured Down Under with Australian songsmith Shane Nicholson, who he befriended at the Tamworth Country Music Festival, with dates running from January 30, 2014 (Katoomba) through February 8 (Melbourne). Shortly after that, realizing that he already spends much time touring abroad, he applied for a received dual citizenship status, in Ireland and in the U.S.

His album One Way Journey Home was released in summer 2014. The Gregory Page Trio (with Sky Ladd and Josh Hermsmeier) released their first live CD Hello Hoorn in 2015, recorded that fall on their Netherlands tour.

A new album called A Wild Rose dropped in the latter half of 2018, with a single for "Waiting For the Sun Again" soon added to Deezer's Nieuw Deze Week playlist, as well as the Wakker Worden playlist.