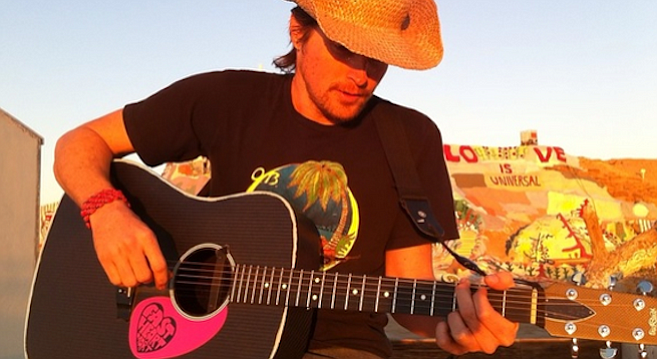 Based in North Park, Fast Heart Mart is the solo project of Martin Stamper from the Western Collective. "I earned my moniker when I passed out and died a few times and was finally diagnosed with a heart condition that makes my heart fibrillate or race," he says. "Don't worry, I now have a defibrillator that shocks my heart back into beating so I can keep singing songs about questioning the system, the Big picture, bugs and other fascinating things."

Since 1999, he says "I have toured a lot in my Volkswagen Vanagon - 32,000 miles on vegetable oil) - playing shows from coast to coast in the USA and touring both islands of New Zealand." An album called I Fell in Love Then I Fell Apart (Mutant Mariachi Records) was released in 2013.

In 2017, he became an author. “European Music Tour with Fast Heart Mart is a compilation of all my journal entries from the tour I did in summer 2016. I was mostly in Northern Germany, Hamburg, Berlin, Koln, Frankfurt, Belgium…. I did about 23 shows in 23 days over there, racking up 4500 kilometers on the Autobahn in my tiny rental car.” Stamper sells the book at shows, as well as online.

If you haven't seen Fast Heart Mart in person, I highly recommend it. His stage presence is great. Off stage I found him to be a warm friendly engaging regular guy. I first saw him at play for a small audience at Bugsy's in La Mesa, I had a half dozen or so other musical events in and around the San Diego Area. I chose Bugsy's for several Reasons. One was Johnny who runs the show at Bugsy's on Saturday nights is a good friend of mine. Dan Moran who owns Bugsy's is a friend. I believe in supporting friends. Johnny told me that Fast Heart Mart is a Banjo player who's style includes Bluegrass. Being someone who enjoys banjo and Bluegrass, the choice was simple.One I'm glad I made.