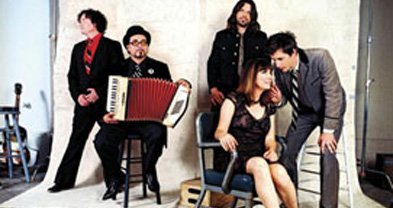 "I was born August 19 at 6:20 a.m.," says Frank Lee Drennen on his website. "My dad was in the Marine Corps. He was in the EOD (Explosive Ordnance Disposal); he blew things up for a living. My mama lives in a silver-mining camp town esablished in the early 1860s called Chloride in Arizona. Her family is from Arkansas. Her dad, Homer Gunn, was a travelling preacher. Grampa Gunn's mother was named Roxy Gunn. Dad's parents are from West Virginia. Grandma Drennen's maiden name was Littlepage and she was born in a lumber camp. Lee Andrew Drennen, my Grandpa, was a factory worker and played the piano."

"I play a cream Fender Telecaster through a late 1960s all point-to-point tube driven Ampeg with one 12 inch Jensen speaker called a Rocket."

The band recorded their album Honey and Salt in 2008, recorded (on analog tape) in Echo Park, and mixed in Nashville by Richard Dodd (Wilco, Tom Petty, George Harrison, Steve Earle, Roy Orbison, etc.). The record was released on local Populuxe Records label. An outtakes collection Orphans and Strays was released in 2009.

“I was drumming and singing backing vocals," says McRee. “The road is usually amazingly great in England, in no small part due to the cask-conditioned ales. The difference between these suds and their American craft beer counterparts is their low alcohol content and lack of pasteurization. The beers taste of fresh ingredients and live yeast. The result is surprisingly intoxicating and delicious.”

Their 2011 album Bright Morning Stars was re-released on 180 gram vinyl in January 2015. They spent that summer touring with X, and then Dave Alvin & Phil Alvin and the Guilty Ones, in support of their album It's Everly Time, a 13 song tribute produced by Grammy-winning producer Mark Linett (Brian Wilson, Los Lobos, Randy Newman). The album's lead single “I Used To Love You” was also produced as a video, as was the single “The Price of Love.”

Videos were released in late 2015 for “I Used To Love You” and “The Price of Love,” both from It's Everly Time.

Their late 2017 album More Love was produced by John Doe (X) and featured contributions from Elliot Easton (the Cars), Greg Leisz (Watkins Family Hour), and DJ Bonebrake. It was preceded by a single for “Boundless Fearless Love.”