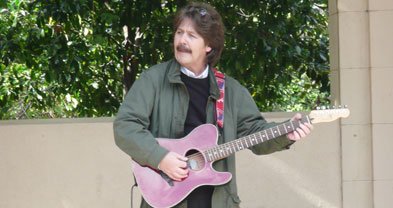 Influences: The Beatles, Badfinger, the Lovin' Spoonful, the Hollies, the Byrds

February 1964: The Beatles’ “Do You Want to Know a Secret” and “Love Me Do” dominated the U.S. and U.K. charts. British songwriter Dave Humphries remembers it well — he was there. Humphries moved to San Diego in 1996, but at one time the native of Durham City, in northeast England, was known as someone on the periphery of the Beatles story. In fact, he holds the official title of “The Man Rejected by Apple Records [four times] More Than Anyone Else Alive.”

Humphries’s appearance at the local BeatleFair in 2003 allowed him to meet and play with another figure from the Beatles’ past: Tony Sheridan, for whom the Fab Four played on their first-ever recording, “My Bonnie,” credited to Tony Sheridan and the Silver Beetles. While Sheridan was at BeatleFair, Humphries talked him into cowriting and recording a song in Mission Hills: “38 Days” appears on the 38 Days CD self-released by Humphries. The recording was made easier due to Sheridan’s longtime keyboard player Wolfgang Grasekamp living in La Mesa.

Humphries also tried to get onetime Beatles drummer Pete Best to participate in the “38 Days” recording, since Best was in town at the same time for BeatleFair. It was rumored that Best’s reaction to the invitation was “Show me the money.” Best’s agent reports that he’s paid $4000 to appear anywhere and upwards of $6000 to $10,000 if he performs. At least being rejected by the Beatles has paid off for someone.

Humphries’ 2008 record, And So It Goes..., from Blindspot Records, was produced by Mike Kamoo (the Stereotypes) and Wolfgang Grasekamp at Kamoo's Earthling Studios. Kamoo makes a guest appearance on the album, as does Bart Mendoza (the Shambles), Todd Hidden (ex-Rockola member), and Tony Sheridan on 5 of the 11 tracks.

The album received airplay on BBC Radio Merseyside's Juke Box Jury on March 29, 2008, in a show hosted by Spencer Leigh, documentary writer and author of the Merseybeat book Let's Go Down to the Cellar.

In April 2010, Humphries released his fifth album, Hocus Pocus on Joker Lane. “The title came to me after my wife met this interesting guy while in her art studio at Balboa Park,” says Humphries. “The guy just kind of wandered in and, after hearing that her husband was doing a CD, he told her he’d been sent from God to give me the album title. How could I refuse a prophet like that?”

Humphries shares his recollection of the night John Lennon died, on December 8, 1980: “It was just like another normal December morning in Durham, northeast England, cloudy and a little cold. I heard my dad go off to work and before long would hear my mother shout up the stairs, 'Are you getting up?' But today she didn't do that, today it was 'John Lennon has been shot.'”

“A sick feeling consumed me. I didn't know how to handle this. Of course we'd had deaths in the family, but this was different, it felt as if my youth had been torn away. My hero was gone, a man whom I felt I had known personally since 1963, a man I admired, a man who together with his three mates inspired me, made me laugh out loud, made me pick up the guitar, a man murdered by a bastard with a gun. I recall the BBC showed Help! that night. I didn't watch, didn't see any of the news reports, couldn't; I don't know now how I got through the days or nights. I tried to avoid friends, couldn't discuss it -- just felt raw. It was months before I could listen to John's voice without filling up and breaking down. John, who gave so much to the world, murdered for what?”

In late 2014, Humphries began teaming up with Greg Gohde and Bass Clef Experiment Trio (with Owen Burke on drums), for performances at local venues like Java Joe’s.