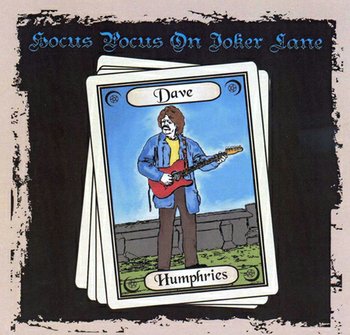 Dave Humphries says "Regarding Regina Leonard and Hector Penalosa’s involvement in the CD - after writing 'Rolling Up to Heaven,' a gospel song, I knew I needed a strong female voice to sing with me.
And there she was, in an Ocean Beach greasy spoon diner. This beautiful girl came up to be and took my order. She said I looked like a singer who just might need a female vocalist. Yes, just like that it happened."

"A month later, I pulled out a phone number I had put in my coat. The message said if you need a base player or any help with anything, give me a call. It had been in my pocket for months - the name was Hector Penalosa, os Zeros and Baja Bugs fame. Hector plays on four songs, and some were recorded at his studio in National City. The other songs were recorded and produced at Earthling Studio’s by Mike Kamoo."

"I'm fortunate to be working with great artists like Mike, Regina Leonard, Hector Penalosa, Annie Rettic, and Bart Mendoza. And of course all of my bandmates; Toby Hinkle, Todd Hidden, Wolfgang Grasekamp, Fin Park, and Dana Garrett, who played a great sax on 'Rolling Up to Heaven.'"