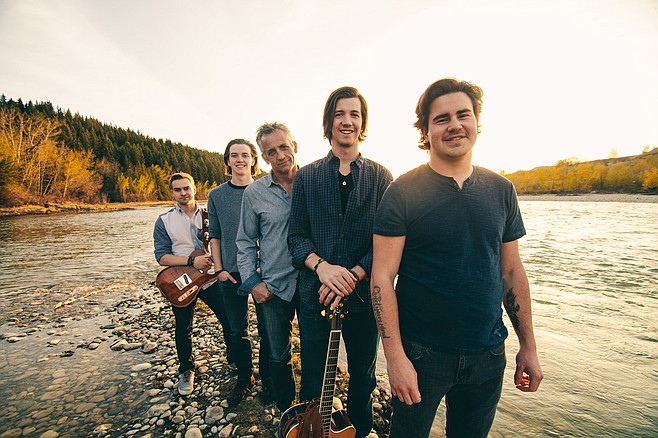 RIYL: Back to the Garden, Berkley Hart

The band is fronted by Dail Croome and his two sons, Patrick and Liam, who were brought up on stage with their father when they were five and three years old respectively. The trio has been singing and playing music together ever since.

Patrick met Brayden Tario in high school and they became friends through their shared interest in hockey and music, with Tario joining the Croome family band (then called Strange Arrangement) as their drummer in 2011. Guitarist Brandon Haddow (who played with Tario on a hockey team and in a metal band) was added to the lineup in 2013, when the band changed their name to Daring Greatly.

A five-song EP titled My Ecstasy was released at the end of 2014, followed by an 11-song full-length in July 2015. After signing with an L.A.-based booking and PR agent, they played their farewell show in Canada and relocated to San Diego.

“He made a bunch of big promises to us and, when we made the conscious decision that we were going to make the move, we sold or left everything we had. We bought a 1987 30-foot motor home in a small town not far from us. Unfortunately, while we were driving it home, it caught fire.” Undaunted, they purchased a 19-foot trailer with tent beds that come out the sides. “We towed it with the Jeep we had, and a small cargo trailer towed by another small SUV.”

All five members, including guitarist Brandon Haddow, finally landed in Vista. However, “When we got here, we had no gigs. The big promises fell through. We were completely misled, and we were paying this guy too.”

Three months later, “We were still living in that trailer and trying to get gigs all on our own. Thankfully, it didn’t take too long to get momentum, as we started to get our own shows and were meeting some really nice people who were willing to help out and support the band. After a whirlwind eight months down here, we have our trailer parked on our friend’s driveway in Fallbrook, and it’s fantastic living! At this point, we’re completely self-managed and prefer to do things ourselves. Or we’ll accept help, if it’s offered to us.”

The DIY networking was demonstrably effective, with plenty of paying gigs each month. By early 2016, they were recording a new full-length with Scott Rogotskie at Skie Music Group in San Clemente.

They did tend to stand out amongst the area acts they share bills with, thanks to everyone in the group sporting noticeably Canadian accents somewhat uncommon in the land of tacos and craft beer. “Rush comes up in almost every conversation with locals,” laughs Tario.

“I don’t even think Canadians talk about Rush as much as you guys do.”

They describe their music as blood harmony rock. "We truthfully didn't know what to call our original music, because we've heard so many different things," says Tario. "We had people say 'You guys are southern rock' or 'roots rock' or 'Americana.' But we found out that this changes, depending on where you are in the world. It came down to this; We are family band, the Croome brothers, Patrick and Liam and their father Dail, hence the term 'blood,' who harmonize with their voices and play rock 'n' roll with their best buds."

However, at the end of 2016, the band discovered that their visas only allowed for six months in the U.S., and they'd have to return to Canada. Croome says he’ll miss his local friends. “The reason we’ve been here as long as we have is the people are so friendly. Californians love original music. We wouldn’t have been able to play nearly the amount of original music [in Canada].”

“But U.S. politics has lost its way. We’re not interested in fighting those forces. We want to concentrate on the good and go to where the culture and the politics appreciate people like us.” The band decided to embark on what is essentially an endless tour.

When guitarist Brandon Haddow got stuck back in their Canadian homeland due to immigration issues, the group closed out 2016 touring with auxiliary guitarist Greg Douglass, best known for playing on and co-penning radio hits with classic-rock acts Elvin Bishop and the Steve Miller Band. Douglass played with the band for both Daring Greatly sets and for Steve Miller tribute performances as the Pompatous of Love.

In early 2017, the band won a contest to open for Bon Jovi in Las Vegas on February 25 (with Douglass on guitar), using a video from a recent show at the Whiskey in Los Angeles. “We had about 50 people come from Canada, and 50 people come from California,” Dail Croome told the Reader. “Some of them spotted us underneath the stage and started screaming and cheering. It made us feel like we weren’t alone.”

A video debuted in early 2018 for "Black and White," the first single from their sophomore full-length Works of Art.