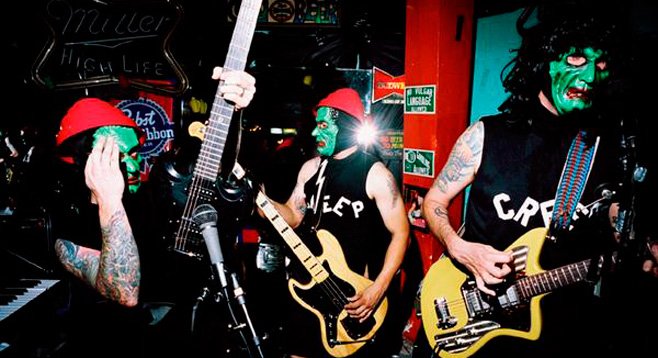 The Creepy Creeps is made up of players from bands such as the Locust, Struggle, and Tarantula Hawk. The band usually dresses in mariachi clothes, with skulls painted on their faces.

Mixing punk and garage rock with surf music, their first album in 2006 came out on U.K.’s Inka label. Being vinyl fans, their records so far have all had wax editions.

The Creeps know that when it comes to surf rock, it’s no longer enough that you should simply play a guitar. These days, it’s about how weird you can make your guitar sound while remaining inside the boundaries defined by surf and outside of the boundaries defined by the blues-rock guitar pyrotechnics that ultimately pulverized surf rock into oblivion by the mid to late ’60s. The Creepy Creeps’ guitar warbles and chirps and resonates with pure punk static. The drums are solid firecrackers, and the keyboards are vintage and electronic.

But the Creeps are revisionists, not pragmatists. They’ve managed to fire up the music with a boatload of their own ideas, not to mention living by a set of their own Rules to Rock.

While wearing Creepy Creeps chic (mariachi outfits, caveman drag, or spacesuits), the band likes to get a rise out of its fans. “We heckle them,” says guitarist Dave “ Creepture” Warshaw. “Every time we play, we explain that this is a dance party. Usually no one dances at the beginning of the show, but by the end everyone goes nuts.... Two of us were in the original [early-’90s] lineup of the Locust.”

During the eight years they've been playing “creepy surf music,” Warshaw says the Creeps have been accompanied by two go-go dancers.

“A lot of the time people will try and grab the girls and get stupid,” says Warshaw. “But [groping] is not really a smart thing to do; when it gets radical, they get a kick in the head.” So the Creeps now perform with two male “crowd rousers.” They try and keep the crowd from going awry.

“There is always some complete rookie who takes things the wrong way. The girls are there to encourage a dance party, not to go home with every drunk asshole who thinks they like them.”

“We only have vinyl records. If someone wants to buy our music at our shows, they have to go buy a record player. This alleviates the problem with downloading music. It keeps vinyl alive.”

“We don't owe anybody anything. If you want to help the band out by putting out our music, fine. Green Door Records and Skateboards helped us with our 7-inch [45-rpm single]. They pressed 600; they got 300 and we split the other 300 with the Widows, who were on the flip side.”

The British label Inka put out the Creeps’ self-titled 12-inch album. “They put out a limited edition of 500 colored vinyl discs. Only 250 made it to the U.S. Their label is blowing up because of shit like this. They give us our share of records, and then we call it a day. They don't owe us and we don't owe them. People fuck up by owing other people billions of dollars. We're not looking to have billions of dollars.”

In March 2013, they played the South by Southwest music fest in Austin, TX, along with fellow locals Hills Like Elephants, the Bastard Sons of Johnny Cash, El Vez, and Retox. That October, they won Best Live Performer at the 2013 San Diego Music Awards.