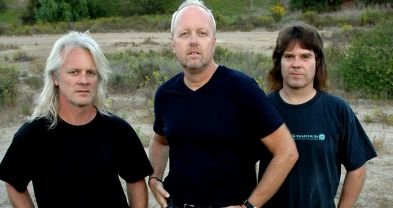 Sound description: Cross John Hiatt and Gregory Page, add a little Neil Young and Jackson Browne, and then toss it in the trash and go out and buy something by the Coyote Problem.

"I grew up on the cosmic cowboy music of the Flying Burrito Brothers, Neil Young, Emmylou Harris, and Jackson Browne" says Peter Bolland of the Coyote Problem. This youngest of three boys born to Dutch immigrants spent his teen years in Ventura. After earning an M.A. in philosophy he settled in San Diego with his wife Lori and began teaching, before deciding, "There just wasn't enough hard-core alt-country Americana roots-rock stuff being played out there. Hey, I'm busy too, but damn it, something had to be done."

He was soon joined by California-native Danny Cress on drums ("His style is dead center in the heart of classic American roots rock, back when there was no difference between rock, jazz, and country"). Later, Bolland and Cress were joined by Billy Fritz on bass and Barry Scott on guitar, mandolin, and pedal steel. Bolland writes the songs and plays guitar, lap steel, mandolin, dobro, and harmonica.

Over the glowing, dirt-simple rhythm of Cress and Fritz, the two-guitar attack of Bolland and Scott soars like buzzard wings on a hot desert updraft. "I like to say [we] blend together the sadness of alt-country, the swagger of swamp rock, and the insight of singer-songwriter folk into Americana rock."

As for their name, Bolland explains, "When my wife Lori and I moved into this neighborhood, one of the first things our neighbors told us was, 'We have a coyote problem.' I love listening to the coyotes howl almost every night. It's a beautiful, ancient sound. They're magnificent animals, really, just trying to survive like the rest of us. Coyotes ply the netherworld between the city and the country. They're the ultimate suburbanites. They've been hunting these hills for 100,000 years. We've been here for 200. Maybe I should have called our band the Human Problem."

In February 2009, Peter Bolland announced "The Coyote Problem is on hiatus. We’re taking a break. Maybe a long one...Being the front man in a rock and roll band doesn’t hold the same joy for me as it once did. Instead, I feel my joy pulling me in other directions. Artists are restless by nature."

Bolland has also served as a professor of philosophy and humanities at Southwestern College. In March 2009, he went to Washington D.C. to sing “Martin King & Coretta” and “The Darkness in Me” at the national conference of the Peace Alliance and Americans for a Department of Peace.