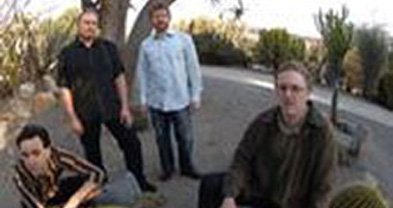 Cosmologic was founded in 1999. The group initially focused on the music of Ornette Coleman, Eric Dolphy, John Coltrane, and other artists, but quickly moved towards performing original compositions. In the fall of 1999, Cosmologic used a weekly engagement at the Galoka Jazz Scene in La Jolla, California to develop its repertoire and sound.

After half a year of weekly concerts to enthusiastic audiences at Galoka, Cosmologic recorded its first live album there, Staring at the Sun (2000), featuring all original compositions. The CD release concert at the Athenaeum Music and Arts Library in La Jolla featured a guest appearance by renowned trombonist George Lewis.

In 2001, the group's trombonist, Michael Dessen, moved to the East Coast. For the next few years, Cosmologic focused on touring, recording, and festival performances. Their 2002 West Coast tour culminated in a live CD recording at Trummerflora's Rubble on Spruce series at Spruce Street Forum in San Diego. This was released as the group's second album, Syntaxis (2002), to critical acclaim.

In September 2005, Cosmologic released Cosmologic III, their third acclaimed album of all original compositions, featuring special guest appearances by guitarist Al Scholl and a live recording of a performance at the Zeitgeist series (Mat Bevel Institute) in Tucson, Arizona, as well as studio recordings made in Termite Studios in San Marcos, California. Fall 2005 also marked Cosmologic's first tour of the northeastern US and Ontario, including an appearance at the Guelph Jazz Festival.

Cosmologic traverses the broad terrain of creative jazz and improvised music, integrating high-energy playing, intense introspection, rich grooves, open textures, and collective alchemy. Praised by critics in The Wire, Cadence, Coda, Musicworks, and many other publications, the quartet has released three albums of all original material. Their performances weave together an unusually wide range of methods and sounds, prompting Greg Burk (LA Weekly) to write that "Cosmologic embodies every value that hooked me on improvised music."

Since its founding in 1999, the collectively run ensemble has been building an extensive repertoire of original music. Central to the group's sound is their commitment to developing challenging and original compositions. Exploratory improvisation is ever present, but takes place within complex pieces that are composed by an individual member and transformed through extensive group work.