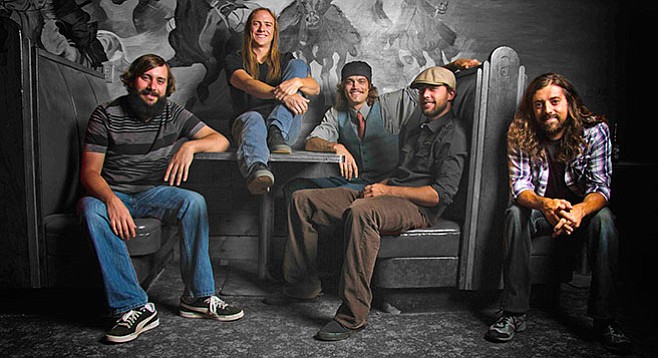 “We play energetic and funky rock and roll, with inspirations drawn from reggae, jazz, hip-hop, and jam bands,” says Alex Gow Bastine, who sings and plays keys with Brothers Gow.

Originally formed in the mountain town of Flagstaff, Arizona in 2007, Brothers Gow moved to Concord CA, in the Bay Area. After a year of living in two different houses and not playing as many gigs as they wanted, “We didn’t even know we wanted to move from the Bay Area until we rolled into town before a Gallagher’s gig,” says keyboardist Alex Gow Bastine. “We felt the beautiful weather and we all just kind of decided to move down to San Diego on a whim. We were here a month later.”

With their 15-passenger van pulling a trailer full of equipment and lighting gear, four members of the funky jam band rented a house in O.B., three blocks from the beach and a stoner’s throw from Gallagher’s, where they played on New Year’s Eve. They soon picked up a local drummer, Nathan Walsh-Haines, who lives in Normal Heights. “The best thing about my neighborhood is aggro-punk-pop karaoke for PBR-slamming hipsters at Bar Eleven,” he says. “Absolutely hilarious.” Not that he’s ruled out a move to O.B., because, he says, “There’s no sunset surfing that I can walk to.”

Guitarist/singer Kyle Merrill, who was born in Ipswich, England, says, “I’ve moved around a lot in my life, but I think I finally found that ‘better place’ in San Diego. I like to hang out at the lookout spot where Ron Burgundy took Veronica Corningstone in Anchorman.” Not that O.B. is a perfect paradise. “I don’t like the humidity that the beach brings in the winter. Mold sucks!” Also, “Our house was recently broken into when we were on tour. Total violation of our personal space. It makes you feel gross.”

Bassist Carson Church has just one bitch about the beach. “Finding parking for the van and trailer.” Guitarist/singer Ethan Wade likewise has a single complaint. “Not being able to take our trash out through the backyard after new neighbors moved in.”

Alex Gow Bastine (who cites local band Pinback among his faves) has nothing but kudos for his adopted neighborhood. “I have a garden in the backyard, so you have to love San Diego for never freezing. I also like Sunset Cliffs and the O.B. Noodle House.”

Their debut full-length Key of Jee, released in early 2008, was followed in early 2013 by Chapters, produced and mastered by Lucas Stephen. They launched a nine-state tour with their newly rebuilt light show at Winstons on May 23, 2014, for a bill that also included L.A. jam band Quactus.

The Brothers Gow Foundation for Music Education was launched in 2014, and in its first charitable event raised enough money to put a stringed instrument in all eighteen classrooms at OB Elementary School. The following year, the Ocean Beach Town Council Board of Directors recognized the Brothers Gow Music Foundation with an OBTC Award, Programs for Youth, at their annual Awards Dinner on October 21.

Much of the next couple of years was spent touring. By July 2017, they'd already played 65 shows that year from coast to coast.

2018 came with a brief roadblock. "Due to a really serious injury to my spinal cord and the firm directive of a physician, we need to cancel our upcoming spring tour," reported drummer Nathan Walsh Haines. After his recovery, the band headed out on an eight-state, 22+ date tour that kicked off September 7 at Winstons.