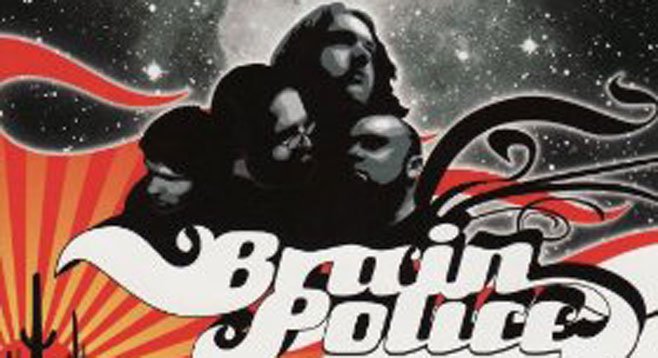 The Brain Police were an early psychedelic garage band who, in the late '60s, opened for many national acts, including the Who, the Byrds, Cream, Jefferson Airplane, Strawberry Alarm Clock, Steppenwolf, and Buffalo Springfield.

They essentially spun off from the group the Man-Dells, with guitarists Rick Randle and Larry Grant and bassist Norman Lombardo, who were all still in junior high when that group released its first single in 1965, "Bonnie" (with "Oh No" on the flipside). The trio also played with the Other Four.

Jan Tonnesen recalls "Norm Lombardo, bass player for the Man-Dells, and later the Other Four, played with the Avengers, the band I was in before it became the Contrasts. I also dated Bonnie to whom the title refers."

The Man-Dells/Other Four became the Brain Police in 1967/1968, with Rick Randle's younger brother David Randle joining on guitar, and earned a large local following with their Beatlesque harmonies and satirical lyrics. David Randle recalls "Rick and Norm were amazing at doing the Beatle type harmonies, and that was certainly a part of our style [since] they had been in the Other Four together."

The Man-Dells, the Other Four, and the Brain Police were all part of the same local scene that included groups like Framework. "Dan Orlando's band name before Framework was Linda and the Centaurs," recalls David Randle, "and I dated Linda, so we were all really pretty connected...we were playing four times per week, so the main bands I actually heard were the ones we got a chance to play with, like Framework, Glory, Marsha and the Esquires, and also the Cascades." For awhile, the Brain Police were managed by KB Artists, which also handled Framework.

Local concert promoter Carey Driscoll, who later ran the Acoustic Music San Diego concert series, remembers "The Brain Police were one of my favorite local bands of the late '60s. Rick Randle is still around town...his brother David was in the news a lot for getting kicked out of school because of his hair length. He argued that it was necessary for his profession."

"The Brain Police had two lineups," continues Driscoll. "Their core was a five- to six-piece rock band, and for some shows they were supplemented by a black, mixed-gender group of singers -- and maybe horns, I don't recall for sure -- called the Soul Patrol, with whom the repertoire expanded to include a lot of great soul and R&B stuff." The first Brain Police/Soul Patrol show was at the Shangrila in Chula Vista.

The Brain Police landed high profile gigs like opening for Jefferson Airplane, as well as for Buffalo Springfield at downtown’s Community Concourse in December 1967. "That was the last show we did with the Soul Patrol as part of the Brain Police," recalls David Randle, "and it was the last time we played much of anything other than our original songs...'Conquistador' was an amazing Procol Harum song. We didn't play a cover unless there was something we really liked about it."

It was also the Community Concourse where they opened for the Who on August 27, 1968, backed by a light show created by Liquid Spectrum. "The Who demolished part of our P.A. system," recalls David Randle. "The P.A. System that the Who sang through was ours and was part of the equipment they destroyed. Luckily for us, the promoter [James C. Pagni] reimbursed us."

"It was hard to hear on the stage because, back then, a good monitor system was an afterthought," he says. "But I know the Who was loud, and I do believe we were loud as well. It's so fun to imagine all the great people that were at our various shows. Musicians from other bands, friends and even strangers that I've gone through life getting to know after the fact."

They also warmed up for Eric Clapton's new supergroup. Randle recalls "There were two Cream shows. It was a matinee, afternoon show, then they cleared out the place and a new audience came in for an evening show. Both shows were different, because we each played a bunch of different songs than we did in the previous show."

"I was soloing in our third encore, and they brought Cream to the stage early, and I looked over and Clapton was watching me play. Pretty heady for a 19 year-old!"

However, the album they recorded failed to land a major-label contract. "The original release, which was only intended to send out to record labels so that we could get a recording contract, was in a plain white jacket," recalls David Randle. "My brother Rick, who was a pretty phenomenal cartoon artist, created that album cover which was used on the re-issue. I can only imagine how good the record might have sounded if we had gone into a real L.A. or New York studio to record it."

Things within the band got rocky, with Sid Smith departing and being replaced by Nate Rubin, at least for one nearly-final show. According to David Randle, "When Sid left to tour with Roy Head, Norm decided to move to San Francisco and Rick followed him. I was the only one left."

Nate Rubin recalls "As I remember, I was on for the County Fair in El Centro, and then they rejoined for the next date in Yuma. We did all covers. Would have loved to have done some original material. We performed as a power trio."

"Yeah," says Dave Randle, "things were really in flux while Sid and Norm were deciding what they were going to do with their musical lives."

After a local show opening for Steppenwolf, who they were on a short tour with, the Brain Police split in December 1968.

A self-titled album recorded by the Brain Police in La Mesa in 1968 sat on a shelf for over 30 years until it was released by the U.S. reissue label Rockadelic.

Local music historian Clark Faville can be credited with rediscovering the Brain Police and getting their music in print. His interest in local music essentially began when he found a copy of the unreleased demo album. "It’s ungodly," he says. "Ten songs ranging from Beatlesque pop to the heaviness of Blue Cheer. That’s the sound I seek out from that era: guitar-based heavy rock, blues, pop, and psychedelic. Stuff from 1965 to 1973 or so.”

Faville's collection now includes rare 45s, albums, and live tapes from local groups like Sandi and the Accents (“They were huge from '63 to '66”), the Five Pound Grin (“They became Pale Fire and I have both their 45s”), and the Misfits (who opened for the Stones at Balboa Bowl in 1965), among others. He’s also helped gather material for a number of reissue recording projects. “The labels don’t pay very much, just a few records and a small fee. But I love turning up rare stuff like this.”

Among those reissues is the Brain Police album, reissued by Texas-based Rockadelic Records. “I found their guitar player and he thought it was a great idea,” Faville says before playing me the BP’s “Election For Mayor.” It reminds me of the Lemon Pipers (“Green Tambourine”) with distinctly Byrdsy guitars. Lyric sample:

“I’ll do the most in town (election for mayor),
I’ll drill the hippies down.”

"The song is about as goofy as it gets," says Faville. Rockadelic has also released music by late-'60s San Diego rockers Framework. Faville tracked down band members, obtaining unissued 45s and other material. “I ran ads looking for the bass player for three years before he finally called me. He’d been kind of a transient, moving around a lot. He only had one tape, but it was an hour long reel-to-reel concert recording. I couldn’t believe it. Perfect sound quality.”

Faville says he rarely sells anything outright. “I did trade a Brain Police record I got in San Diego to someone in France. But I’m primarily a collector.” Among his favorite memorabilia is an 8X10 photo of local band the Orfuns playing onstage in the '60s at Ozzy’s Battle of the Bands. “That was a big deal in San Diego then. It was a guitar shop and they’d have, like, 20 bands in an afternoon. What a scene that must have been, huh?”

Other labels with Brain Police records now include Shadoks Music (Germany) and the Italian label Akarma, which reissued the original demo album in 2000. A Normal/Shadoks CD reissure of the original unreleased album came with songs cut for a 1969 single and several earlier singles (1964-1966) by the Man-Dells and the Other Four, both featuring Brain Policemen Norm Lombardo and Rick Randle.

Rick Randle joined local garage rockers Framework shortly before they broke up, also forming a duo with Framework/Orfuns drummer Carl Spiron that played live but never recorded. That duo was joined in 1969 by Brain Police singer/bassist Norm Lombardo in a group called the Dry Creek Road Band that recorded at least one demo. Randle and Lombardo went on to back up Rita Coolidge together, and Randle also played with Bighorn, Child, and the Seattle band Randle-Rosberg, which later changed its name to Striker and put out one album in 1978.

Original Brain Police drummer Tony Johnson later played with Hoyt Axton, Mary Wells, Commander Cody, Maria Muldaur, and others. Later drummer Sid Smith -- who had also played with the Roosters -- left the Brain Police after their first single to tour with Roy Head, before passing away several years ago.