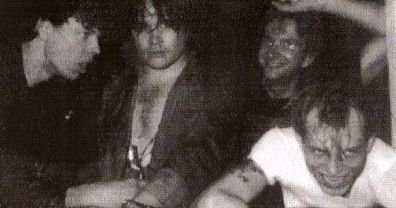 Influences: The Ramones, the Melvins, Led Zeppelin, Nazareth, UFO, the Scorpions, the Misfits

Formed originally in 1978 under the name the Nutrons, by George Anthony and guitarist Dave Astor (R.I.P.; father of former Locust/present Cattle Decapitation drum wizard Dave Astor Jr.), the Battalion of Saints were influential not only in San Diego and on America’s West Coast, but internationally as well, collaborating and touring with well-known British punk acts Discharge, Broken Bones, the U.K. Subs, and the Exploited.

The Saints were real punks, playing true hardcore punk music: violent, loud, fast, and political, at a time when hardcore was still fresh and not a commercial product. Punk in the early ’80s was an ideology, not just a fashion statement; individuals expressed themselves radically through their attitudes, their clothing, and their music. Battalion’s songs railed against the government, big corporations, televangelism, and police brutality.

On a song titled “E/B,” singer George Anthony screams, “The government controls all our lives / When they pump us full of lies / Large corporations are all the same / What do they think — we have no brains?” Nearly every song has a political or social message — commentary rarely, if ever, heard in commercial “punk” bands these days.

Dated by his bottle-blonde punk mullet, Smith’s rant against commercial rock continues with “Styx, Van Halen, all that garbage that’s on the radio, you know? It’s deteriorating your brain.”

The band's manager was Marc Rude, who drew countless local concert flyers and record covers for the Misfits, the Offspring, L.A. Guns, and others. Rude helped run Dead or Alive concert productions, which brought punk acts such as Black Flag, the UK Subs, GBH, and the Subhumans to San Diego in the early '80s. He died in 2002.

The original Battalion lineup released the Fighting Boys 12" EP on their on Nutrons label (Nutrons being their original band name), followed by the album Second Coming, as well as appearing on several compilations. Much of this material has been re-released on the Taang! Records Death-R-Us CD.

"I left the band in ’85 because Chris [Smith] and George [Anthony] were trying to screw me over because their heads got too damn big," says original drummer Ted Olson. "On the album, Second Coming, Chris played all guitars and bass. We had gone through so many bass players that the guy that played bass for us when we recorded couldn’t play the songs well enough, so Chris did the bass."

They frequently played long-gone local venue Straita Head Sound. According to the band's MySpace page, "The Batts were one of the most furious and nihilistic bands in all of Southern California in the early to mid '80s, leading to the deaths of many of the original members." Too true.

The punk-rock lifestyle was unforgiving for Battalion. Before the band’s breakup in 1985, several of the many early members had died.

Guitarist Chris Smith overdosed in a bathtub, Dave Astor committed suicide, another member died of drug-related health problems, and a fourth died from AIDS. Though destruction was the banner of many early punk bands, Battalion set a precedent and laid the foundation of what was to come in San Diego for the rest of the decade, which included other hardcore bands and various incarnations of punk.

Ten years later, in 1995, singer George Anthony reformed the band with his friend Terry Bones (of Discharge and U.K. Subs), playing and recording for a few years. The revised lineup with Bones put out one EP and the Cuts CD, on Taang! Records, which also released a compilation called Death R Us. Anthony was the original member of this lineup (usually dubbed Battalion of Saints A.D.), since two others had died and Olson refused to participate.

In 2006, audio-restoration specialist Eric Van der Wyk of King Tet Productions remastered the band's Second Coming album. According to Van der Wyk, "George Anthony -- he's one of the only members who's not dead -- he couldn't find anyone else in San Diego who could remaster it from vinyl.... I just made a deal to do the reissue, too."

Singer George Anthony had a role in the 2007 film Numb, which was set in 1983 and covered the simultaneous declines of the punk and "new romantic" scenes. The cast included Unwritten Law singer Scott Russo, Matt Hensley (Flogging Molly), and DJs Robin Roth and Mike Halloran.

The reunited punks shot a video and show at Shakedown on May 22, 2011.

September 2015 found the band reunited again under George Anthony, on a west coast tour (hitting Brick By Brick September 19) that was followed on October 30 by a new self-titled 7-inch on the Southern Lord label featuring three tracks; "Darkness," "Bombs," and "Nightmare."