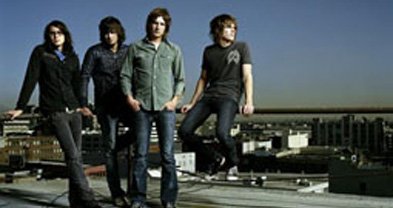 Current Status: Recording, touring, and playing on any TV show that will have them.

Former locals STP were scorned for their seemingly "instant" success; now it's time to resent Augustana for the same. After playing only a handful of shows, they were signed by Epic Records, who released their debut (All the Stars and Boulevards) in September 2005. The album was produced in Georgia by Brendan O'Brien (STP, Pearl Jam), and the title single was for a time the sixth most requested track on L.A.'s KROQ 106.7 FM.

"We dropped out of college in Greenville, Illinois, before the 2004 fall semester to move to San Diego" says Layus, "so you can't say we didn't take a chance to make our music happen." Three of the foursome did migrate from the Midwest; drummer Justin South was a local acquisition.

All the Stars and Boulevards sold over 300,000 copies, and the catchy piano flourishes on their hit song "Boston" helped pushed that song to platinum sales status.

Original guitarist Josiah Rosen left the band in 2006, to embark on a solo career.

In September 2007, the band took up temporary residence in L.A. to record a new album. Many of the new songs debuted in Fall '07 on their website. The band's 2008 album Can't Love Can't Hurt debuted on the Billboard Top 200 chart at #21, with the first single being the piano-drenched "Sweet and Low."

Augustana's song "Twenty Years" was heard on the May 5, 2008 episode of TV's One Tree Hill, as well as being heard on another show, Number, on October 17. Their song "Rest Shames, Love" appeared in the 2008 film PS I Love You.

The group toured with Counting Crows in summer 2010. On Wednesday July 21, Crows singer Adam Duritz jammed with Augustana onstage before getting behind the microphone to perform with his own band at Mountain Park in Holyoke, MA. The multiband jams continued as the tour rolled on.

Their self-titled third album, released by Epic Records in early 2011, was recorded in L.A. with Grammy Award-winning producer/engineer Jacquire King (Kings of Leon, Norah Jones, etc.), with the first single being “Steal Your Heart.” Around the same time, their song “Fire” was covered on teen YouTube phenom Greyson Chance’s debut EP Waiting Outside the Lines.

Their self-titled album failed to live up expectations, despite Epic's major-label push. It only sold around 29,000 copies in the U.S. By comparison, All the Stars and Boulevards sold over 345,000 U.S. copies, while Can't Love Can't Hurt sold 121,000 U.S. copies.

Keyboardist/singer John Vincent left the group in early 2011, to be replaced by previous Augustana band member, David Lamoureux. In September, rumors were rife that the band had split, having been dropped from their major label contract with Epic. However, the tour announcement indicates otherwise, though it appears Lamoureux has left the band, again: His name and photo was cut from the band's Facebook photo album.

In summer 2011, the band embarked on a two month 25-show U.S. tour that included an appearance on the David Letterman Show. After being dropped by the Epic label, they signed a multi-album deal with Washington Square (the Hold Steady, Deaf Havana), with an album planned for April 2014 release.