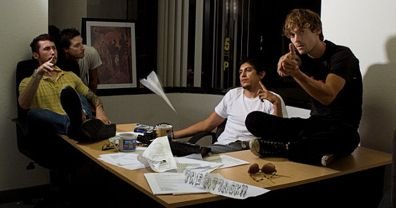 Electro-dance-punky quartet the Attack!! was founded in 2008 by singer-guitarist Ivan Tamayo (Kiss Me Katelynn, Suspect Jones), who grew up in Ensenada, Mexico, and drummer Bryan Famous (London Ghost Show). After playing their first gig at L.A.’s Viper Room, they were joined by guitarist Mitch Scott and bassist Ken Lindstrom.

“There are so many bands who have forgotten what rock and roll is,” says Tamayo.

The Attack!! released their debut single “Dancefloor” in early 2009. The following year, they announced their intention to move to Austin, Texas. “San Diego just has no love for local music. There are so many people that talk about supporting local music, yet I don’t see it,” says Tamayo.

“The cost of living was also a big factor in leaving,” says Tamayo, who grew up in Ensenada and formerly played with Kiss Me Katelynn and Suspect Jones. “I’ve been in San Diego for 29 years, Mitch [Scott, guitar] for at least 10 years, and Bryan [Famous, drums] has been here for 4 years. Austin has a love for what we have to offer.... People in San Diego just want DJs, reggae, and soft indie folk rock.”

Tamayo cites one particularly unpleasant gig at the Ken Club. “The other two bands canceled, and the sound guy reeked of weed and did not know how to mike us or put vocals into my monitor mix without feedback. He even dozed off during the set.”