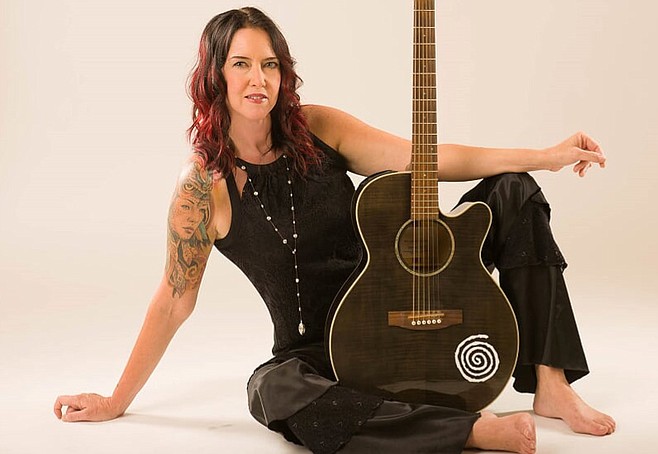 “She was born in Marvel, Arkansas, and delivered by Dr. Wise,” it says on Astra Kelly’s website. “Early interest in music was fueled by family jams, school choirs, and formal music studies.”

Classical and jazz trained, Kelly began her professional singing career after taking note of Chicago's subway performers while en route to her job. After working on her guitar technique, and with a few pointers from a veteran subway performer, Astra earned 50 dollars in two hours and quit her job.

Her subway performances began not only to draw a steady audience but also a steady request for copies of recorded material. Her first CD, Stones, Bones and Boxes, self-released in December 1996, was recorded in her apartment using professional equipment and engineers who later became friends.

Kelly later moved to Southern California and to San Diego in September 2006. Her albums include Subtown Rituals, Acoustic Soul Live, and the aforementioned Stones, Bones and Boxes and a 2004 EP.

She’s also been in the band Not Your Mom with Cathryn Beeks, Marcia Claire, and Bernadette Gallegos. She plays frequently in and around San Diego solo/acoustic or with her backing band, which features Sam Johnson (of Stepping Feet and Michael Tiernan’s band) on bass, James Rhinehart (Fight the Fear) on drums, and Cathryn Beeks on backing vocals.

In winter 2006, Kelly was driving on her own to a gig in Colorado when her tour van skidded on some black ice. “When the wheels hit the dirt, the van started rolling over and I heard the horrible sound of crushing metal, then all went silent,” she says. Her van was resting upside down on a set of train tracks. “I could smell gas and, in fear of explosion, quickly unhooked my seatbelt, fell to the ground, opened the door, and scrambled out. Scattered along the side of the road were pieces of me…my posters, flyers, CDs, PA speakers, clothes and blankets, and other little trinkets were everywhere.”

A driver who’d witnessed the accident helped her gather things and contact police via cell phone, though they were told cops were busy and wouldn’t arrive for another hour or so. “Just before 12 a.m., we saw the tiny light of a train coming down the tracks. We had tried to call the train company to warn them with no luck, and another call to the police was fruitless. We waited as the train approached. I held my breath for what seemed like forever…the explosion of glass and metal was amazing, shattering in every direction and what seemed like hundreds of feet into the air before falling back to earth like snowflakes sparkling in the light of the moon. The engineer hit the brakes, but the train dragged the van under the front for the entire mile that it took it to stop.”

Police eventually arrived, and no traffic citations were issued.

Kelly says her life reached a “major turning point” that night. “The inexplicable events that catapult us into states of awe and grace, these are the snapshots we carry in our minds as we tackle the challenges of life. For me, the crash was so far the single most important event in my own evolution. It was intensely swift and quick, like a warrior’s sword, just the way I like it.”

From 2006 through the next few years, Kelly frequently performed at Dublin Square in the Gaslamp Quarter. “I live right around the corner, and when we moved, we kept getting lost, then we’d find Dublin’s. We finally parked and walked around till we found a place a block away.”

Beginning September 2006, Kelly DJ'd at KPRI (102.1). She started with overnights midnight to 5 a.m. before hosting the station's Saturday night Homegrown Hour, featuring local music, from 9 p.m. to 10 p.m. After showcasing hundreds of local bands, she stepped down from the gig in May, 2009.

In November 2009, she released the EP Battling the Sun, with cover artwork by local artist Billy Martinez. "The sun is a metaphor for our personal power and confidence and how it's a waste of time to battle ourselves - it's a battle that is impossible to win. Being a musician seems like a battle much of the time, but in the end it is a shared dream, that takes more than just the players to realize. So battling yourself, is like ignoring the bigger picture and the common goal."

Kelly has also been the voice of commercials for outfits such as Starbucks, Motel 6, Southwest Airlines, and the American Diabetes Foundation, to name a few.

“Plus,” she says, “I’ve voiced a ton of stuff for a plastic surgery company. They like me because I'm great at reading medical terms and other big words without even knowing what the heck they mean.”

Her EP Timebomb was released summer 2011. It contains five new band tracks, including a full band version of the title track from the Battling the Sun EP release, plus three remixes from SD local DJs.

As of 2012, Kelly -- who formerly managed StudioWest in San Diego -- is a managing partner at Capricorn Studions in downtown SD. Her 2012 concept album Parlor Songs: Love and Heartbreak debuted a new less-rock and roll sound.

“I envisioned a more singer-songwriter torchy sound, and set out to do just that. Somewhere within that quest, I had a sonic epiphany, and the sound I heard was a radical departure from anything I had done before. First, I enlisted the help of DJ Coda Collins to start building some backing tracks.”

“I was also inspired to collaborate with other local songwriters to help grow the sound and share in the very raw and inspirational process of writing songs about various stages of love and heartbreak. Cathryn Beeks, Carissa Schroeder [Emerald City, Sirens Crush], SABA, Sheila Sondergard, and Chris Wilson [Endoxi] and I all wrote songs for this. I cried at each session. Sharing each other’s experiences was incredibly emotional and special.”

Her all-girl folk vocal trio Schroeder Kelly, featuring her with Carissa Schroeder and Caryn Stringer, made their live debut on August 1, 2013, at the Griffin.

The following month, Kelly launched a weekly Tuesday Songwriter's Showcase at Alchemy in South Park. Then, “Unfortunately, the Alchemy showcase has been shut down due to noise complaints from neighbors,” Kelly told the Reader in April 2014. “I do plan on looking into other venues to continue the showcase.”

Her 2015 album Back to Ten, released that September, completes a transition to acoustic-Americana singer-songwriter, featuring local guests on songs like "Light of Day" (Gayle Skidmore), "Lullaby Lady" (Jeff Berkley), and "One True Love" (co-written by and featuring Cathryn Beeks). Tracked at Rarefied Recording in North Park, other guests include Trent Hancock, Simeon Flick, Matt Davies, Chris Wilson, and more.

Chasing the Light was released in November 2017. "The songs are stories of transformation and finding wisdom within the darkness," she says. "The album title reflects the same and touches upon human resilience. As I was writing the tunes, I also began working with Sierra Colt at Bearcat tattoo, who created an image of the Owl Goddess, an energy that has always been with me. When I was in the womb, we had a great horned owl that my folks had rescued living in the rafters. I could not have planned how the tattoo and album creation have woven together. By chance, I was given the rare opportunity to do a photo shoot with an eagle owl named Cailleach, while on tour in Northern Cali. Sierra did an illustration of the Owl Goddess for the album cover."