As I Lay Dying 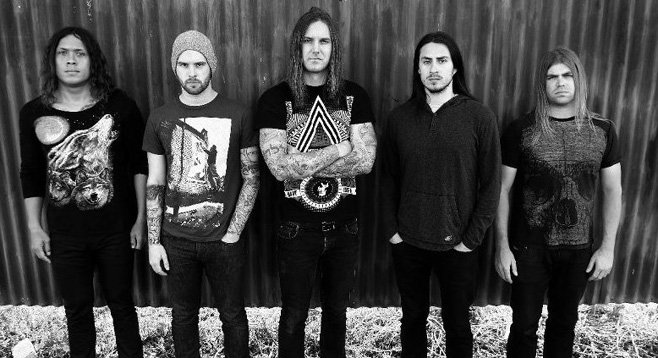 RIYL: Children of Bodom, Nodes of Ranvier, Deadboy and the Elephantmen, Chase Pagan, All That Remains, Killswitch Engage

As I Lay Dying (named after the book by William Faulkner) formed in 2001. The classic lineup consisted of Tim Lambesis (vocals), Jordan Mancino (drums), guitarists Nick Hipa and Phil Sgrosso, and bassist Clint Norris, who was replaced by Josh Gilbert in May 2007.

Hipa describes the band’s music as “brutal, energetic, melodic metal”; Mancino calls it “metal with ska breakdowns.” The band signed with Metal Blade Records in 2003 and spent 2006 supporting their album Shadows Are Security with opening slots for Slipknot and performances at Ozzfest events around the country.

“I never realized, until Ozzfest, about our utterly weird fans,” says Lambesis. “We were signing autographs...this guy brought out his two-week-old baby, and he actually has us sign the baby — our autographs are right there on its body.”

Jordan Mancino recalls, “The hardest thing [about Ozzfest] was getting stuck on a dirt road with our bus in the middle of the Arizona desert.”

Asked about being occasionally called “Christian metal,” Hipa says “All of us in the band are Christian dudes and we’re vocal about it and I think our lifestyles and our lyrics reflect that. But at the same time, we also tend to opt to play in the normal music scene because that’s what we love doing.”

Lambesis received an award from his classmates at his Christian high school, where he was chosen “the person most like Jesus…in the sense of his good works and good actions.”

As I Lay Dying was named Artist of the Year at the 15th annual San Diego Music Awards in 2005. A few things about the band members you may not know:

Lambesis: “I often get anemic from a blood-iron deficiency, but you can’t tell just from looking at me. I haven’t fallen off the stage or anything.”

Double-bass drummer Mancino: “I love Disney movies, theme parks...pretty much everything to do with Disney.”

In May 2007, freshly married bassist Clint Norris left the band and said he plans to attend school. He was replaced by Josh Gilbert. Lambesis posted a message online reading in part “Since we just put a new song up with Josh Gilbert’s vocals on the chorus, I thought I would explain the story of why Clint is gone and where Josh Gilbert came from...

“Clint wanted to pursue a lifelong career that he could be passionate about since he could not picture himself being in the band forever once he got married. His wedding was in March and he’s now able to stay home with his wife. For those of you who are just finding out now, we’ve been playing without him since November 2006...Our first recordings, Frail Words Collapse, and Shadows Are Security were all written and recorded without Clint, so the new CD isn’t any different in that respect. Although Clint was in the band during Shadows Are Security and we will always be thankful for his great live energy, he was not involved in the song-writing process. Therefore, he had a hard time learning the songs in the short amount of time we had while recording. Phil ended up playing bass, and our friend Dave Arthur (who is in an amazing band called Kings to You) did a guest vocal appearance on all of the clean singing. Dave is credited on the record along with other great guest vocalists like Dan Weyandt from Zao."

“We weren’t able to find Josh Gilbert until after we had finished writing [the new record], but he was able to make it to San Diego in time to record both bass and clean vocals on the new record. It feels good to know that the person recording bass and clean singing on our new record will be same person playing those songs live. Our guitar players have always played bass on every record...until now!” Gilbert came from the bands This Endearing and Gate City.

Their album An Ocean Between Us was released August 21, 2007, featuring guest guitarist Adam D from Killswitch Engage. The following week, it cracked the Billboard charts at #8. It lasted eight weeks on Billboard’s Top 200 Chart before dropping off.

The band played on the 2007 Warped tour and then shot a video for “Nothing Left,” the first single off An Ocean between Us. The bleak, futuristic clip was shot in Van Nuys, California, at Sound City Studios with Brian Thompson (Killswitch Engage, Angels & Airwaves) directing. “The high concept storyline mixed with the band’s ripping performance should make this video a metal favorite,” says Thompson. The story, conceived as a collaboration between the band and Thompson, follows a female character through a series of events that take place within a decaying, future landscape.

At the 2007 San Diego Music Awards, the band took home another trophy for Artist of the Year and later that year embarked on a European tour. Their song “Nothing Left” was nominated for Best Metal Performance for the 50th Annual Grammy Awards in 2008.

In 2008, Lambesis’ side band, Austrian Death Machine, released its debut album, Total Brutal, on Metal Blade Records. Lambesis also appeared on the TV show LA Ink, getting a tattoo Jesus rocking out, while As I Lay Dying won Artist of the Year at the '08 San Diego Music Awards.

As I Lay Dying filmed several November 2008 concerts for a DVD, This Is Who We Are, released in April 2009. In October of that year, the band took home the trophy for “Best Music Video” at the 13th Annual Hollywood Film Festival. The winning clip “The Sound of Truth” was directed by Brian Thompson, taking place in a “decaying, futuristic society.”

The Powerless Rise,, the band's fourth album for Metal Blade Records, was recorded in San Diego with producer Adam Dutkiewicz (Killswitch Engage) and released in 2010. It sold 38,000 U.S. copies in its first week, debuting at number 10 on the Billboard 200 chart. Their previous album An Ocean Between Us opened with 39,500 units in August 2007, to land at number 8.

Around the same time, Lambesis formed his own clothing line, Modern Rebellion. They headlined the California Metalfest V on March 19, 2011, at The Grove in Anaheim, before returning to a U.S. tour with Winds Of Plague and After the Burial.

A box set version of The Powerless Rise was released in May 2011, featuring the CD and a vinyl picture disc, a DVD documentary with in-studio footage and interviews, a bass and drum tab book, a hardcover book with lyrics, photos, and an editorial from the band, a 12" x 12" lithograph print, three AILD guitar picks, a mini drumstick keychain, a vest patch, a window cling, and an AILD jacket pin.

Lambesis told Australian metal webzine Disciples Of Metal “Instead of waiting two or three years to do a new full-length album, we’re going to put out something later this year for our tenth anniversary...it will be a combination of new songs, cover songs, and a few remixes. We have three new songs ready to mix.”

Lambesis guested on a solo album by Jamey Jasta of Hatebreed and Kingdom Of Sorrow, titled Jasta and released in July 2011 via eOne Music. AILD then departed on an Autumn 2011 tour of Europe with Amon Amarth, and took home a Best Hard Rock trophy at the 2011 San Diego Music Awards.

They headlined the Decade of Destruction tour through a December 16, 2011 San Diego finale, alongside Of Mice & Men, the Ghost Inside, Iwrestledabearonce, and Sylosis. In early 2012, a new video for “Paralyzed” began streaming online.

Their autumn 2012 tour with Trivium, Caliban, and Upon a Burning Body included songs from Awakened, from which a free preview track, “Cauterize,” was streaming online.

Their 2013 co-headlining tour with the Devil Wears Prada concluded with a two-night stand on April 3 and 4 in Colorado Springs, CO. The tour featured support from For Today (all dates except March 7 and 8), the Color Morale (through March 7), and the Chariot (March 8 through April 4).

Then Tim Lambesis was arrested on May 7, 2013, for allegedly trying to hire an undercover police officer to murder his estranged wife. The band was scheduled to tour with Killswitch Engage, Miss May I, and Affiance, kicking off May 30 in Oklahoma City and concluding July 8 in Joliet, IL.

Lambesis pleaded not guilty to a single charge of solicitation of murder. “Tim never had the intention to harm his wife,” said Lambesis’ defense attorney of the charges. “This whole thing was a set-up by a scumbag snitch, and then law enforcement ran with it.” Lambesis’ bail was lowered from $3 million to $2 million on May 17.

“Tim never had the intention to harm his wife,” said Lambesis’ defense attorney of the charges accusing his client of ordering a hit on his wife. “This whole thing was a set-up by a scumbag snitch, and then law enforcement ran with it.”

Out on bail, Lambesis announced that his comedic metal band Austrian Death Machine would release its third album Triple Brutal, thanks to raising $80,000 via online crowd-funding. In late February, 2014, Lambesis pleaded guilty, admitting that he solicited the murder of his wife. He was sentenced to six years in prison.

As I Lay Dying renamed itself Wovenwar, with Oh Sleeper's Shane Blay as their new frontman. Signed to Metal Blade Records, their first single dropped April 21, 2014, with their self-titled debut album planned for late summer.

In June 2018, after serving time over a murder for hire plot against his wife, Lambesis reunited with his former bandmates for a new song, "My Own Grave," and a June 16 comeback gig at Soma. That was followed with their first North American tour in five years.

Spanish organizers of the 2019 Resurrection Fest dropped As I Lay Dying from the lineup due to negative backlash over Lambesis. April 2019 found a new video streaming online for their song "Redefined," followed by a single for "Shaped By Fire," the title track of their upcoming reunion album on the Nuclear Blast label.

I wish I could get my arms sleeved with Tatts like the middle guy.......maybe when I am older