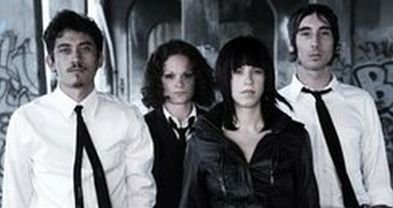 "We were signed to Elektra on my 15th birthday, but the record was never released," says Lindsey Troy of the album she and her sister Anna recorded as the Troys in 2002. "They kept pushing the release date back, and they didn't do what they had promised, which was to make a window of time where they would only promote our single. Instead, they were pushing a bunch of different singles to radio stations at the same time, including Missy Elliott's. I think there was a lot of turmoil within the label because they were on the verge of folding into Atlantic."

The Troys cut a demo and landed a major recording contract with Elektra. “The Troys were going to be, like, the next pop stars,” says Anna Troy. A music video was made. Singles from the forthcoming record were released. And then, nothing. For whatever reason, the Troys were shelved. When it was all said and done, how did she feel? “Elektra was a great opportunity, but it was a struggle. I wanted to be independent and have control of my art. Ten guys in their 60s in suits telling you what to do? When that was over, it was a humongous relief.”

According to sister Lindsey, "Pretty much everyone who originally worked at the label when we were signed lost their jobs when Elektra folded...I believe Elektra still owns all of the recordings that they paid for. We don't have the masters, but we do have a copy of the album, which is nice for memories and whatnot. Elektra owns the recordings but not the songs, so, theoretically, if we ever wanted to, we could sell those songs to someone else."

Anna Troy set out reinventing herself — as a blues singer. “People actually said that the reason I got signed was because I was cute. The blues was my way of saying I wanted to be respected.” She began to collaborate with area blues notables such as Nathan James. The experience exorcised any remnants of adolescence from her voice and added smoke and texture.

Anna originally studied piano as a preteen, until she was given a guitar and lessons from her father, Sandy Troy, author of a definitive Jerry Garcia biography. She became a guitar instructor herself, at Blue Guitar in Mission Valley. Following her four years in the Troys, she began writing and performing her own songs in 2005.

Anna released her debut album, Ain't No Man, in August 2006. Lindsey Troy's first solo EP, Bruises, came out in December '06, with a release party at Lestat's. Lindsey says neither sister regrets their album as a duo going unheard. "Anna and I were getting older and couldn't really relate to those songs anymore."

Along the way, Anna Troy has earned nominations for several San Diego Music Awards and was a top-three finalist in the 2005 International Blues Challenge at the downtown House of Blues. At the 2008 SDMAs, she was nominated as Best Pop Artist.

In October 2009, she announced she was relocating to the east coast. Tracks for her next album were mixed by Kamoo at Earthling Studios. Her band studio band includes guitarist Greg Douglass, bassist Chris Sullivan (the Penetrators, the Farmers) and drummer Joel Kmak (the Hitmakers, the Farmers), with Kamoo adding percussion.