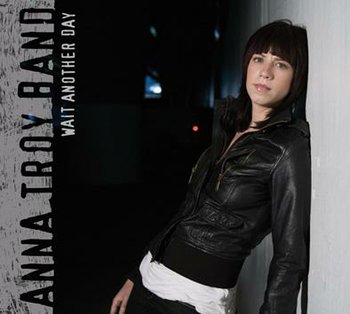 Former Elektra recording artist Anna Troy's second solo disc has been in germination for over a year, though the nitty gritty of recording has been only a few months, off and on. Troy’s blues fans will find much to like on the ten-song album, but they won’t find much blues. Likewise, her detour into indie rock sounds has been tempered.

Instead, what we have is something that incorporates all of the above and more, resulting in something closer to classic rock, in the sense that it’s rock with an enormous sense of melody. Of course, there are a few ballads as well.

It’s been a couple years since the release of her debut solo disc, “Ain’t No Man,” and the sense of experimentation to be found on the new recording has been, frankly, refreshing. In an age where most albums sound like collections of glorified home demos, Wait Another Day stands out. Troy’s guitar playing and vocals have never been stronger, and her songwriting, as usual, is top notch.

But what really sets this album apart is the way it’s been constructed. Opting not to use a set band for the sessions, she has instead gathered a select group of musicians for best fit. Amongst the performers to be heard during the Mike Kamoo helmed Wait Another Day sessions at Earthling Studios: bluesman /bassist Robin Henkel (Big Rig Deluxe), drummer Megan Parchman (Runhoney, Danielle Lo Presti & The Masses), bassist Joe Poma (True Stories), keyboardist Mike Reed (The Smart Brothers), pianist Tim Hines (Lights On) and pianist Daniel Hartzheim. Meanwhile, Bart Mendoza (The Shambles, Manual Scan) and harmonica virtuoso Billy Watson also contribute.

But the album’s V.I.P. position goes to Greg Douglass whose incendiary lead guitar parts fuel much of the album. Virtuoso doesn’t even begin to describe his unique playing. His leads literally wrap around the tunes in a way that adds melody. Best known as guitarist with the likes of the Steve Miller Band and The Greg Kihn Band, he’s also the author of Miller’s mega-hit “Jungle Love.” Here he contributes five co-writes to the proceedings. A further co-write with Reed rounding out the collaborations. The rest of the compositions are by Troy alone.

The album is knee deep in potential singles, ranging from “The Way You Dream,” a finger picked acoustic track that Lindsey Buckingham would have had jealous fits over circa 1976 (and today) to “If You Want Me Now” a pounder that channels the best of her mod and garage influences into a rocker for the modern world.

For those who have been waiting for Anna Troy to reach the promise she has shown since she first began hitting San Diego’s stages as a teenager, or for those who thought her previous efforts would be hard to top, this album delivers.