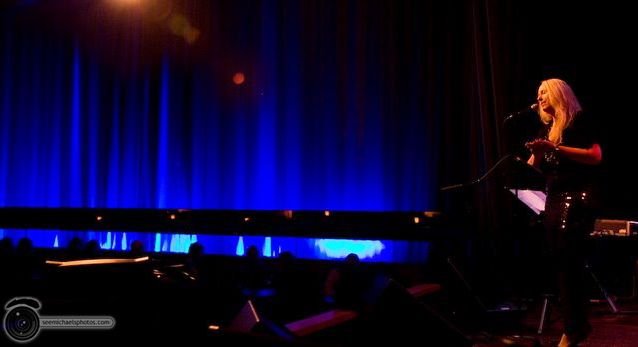 Multi-lingual vocalist Allison Adams Tucker began singing while growing up in San Diego. Raised by parents who were classically trained musicians, she was singing before she learned how to talk. From elementary school on, she studied violin, flute, dance, and voice.

She went to high school in Solana Beach before moving on to college in the Midwest, attending a Christian school in Indiana where she says she was an outcast for being a punk rocker. As well as travelling abroad to Japan and Spain for a few years, she earned her BA in Linguistics and Music, and can sing in six different languages besides English. An astonishing singer, she has impeccable pitch and crystal clear diction, allowing each lyric to be heard clearly, no matter the language.

Having returned to San Diego in 2000, Tucker’s debut CD Come With Me was released in 2008, co-produced by Peter Sprague (with whom she sang on his all-vocal full-length Calling Me Home). Come With Me was nominated Best Jazz Album of 2009 by the San Diego Music Awards. Her band performs as the Allison Adams Tucker Quintet, Alli and the Cats, and the Allegato World Ensemble.

She and bassist Evona Wascinski toured Europe in March 2012, followed by recording sessions the following month in Paris. Tucker also organizes the annual Brasil Jazz Festa, held each year at the Encinitas Library.

October 2013 found her embarking on a five-date tour of Japan from October 18 through October 23, with shows in Nagoya, Hamamatsu, Mito, Yokohama, and Tokyo.

She has toured the world several times and points out things haven’t really improved much over the years. “In theory, booking tour dates becomes easier with each tour based on the contacts I make and the relationships I establish with venues & festival directors,” she explained. “However, the jazz world is changing so fast, and the world economy has an enormous effect on the arts. I wouldn't say it's harder - it's just constantly a fierce learning curve. Like swimming 100 miles through shark infested waters, this business is not for the faint of heart.”

Her 2014 album April in Paris is a direct product of touring. As spelled out in the album’s title, it was recorded in Paris, following an overseas road trip in 2012. "We recorded the album on April 30, 2012 at Studio Ferber, Paris on UNESCO's 1st Annual International Jazz Day, with Herbie Hancock presiding over the festivities being held in Paris that night. It was the final day of my nine concert run through Italy and Paris, and when I realized I'd be ending my tour in Paris in the month of April, I knew I had to make the album."

The album cover features a stark self-portrait with theatrically applied makeup. “I’ve been a collector and sculptor of masks in all my travels since my early 20s, and that’s part of the theme here. I also incorporated elements of my own case of wanderlust in my makeup, with Japanese geisha lips and pink around the eyes, and a hint of inspiration from both Daryl Hannah’s character in Blade Runner and Björk’s makeup on the cover of her original ‘Wanderlust’ single.”

Included on WANDERlust is a cover of "Pure Imagination," best known from the Willy Wonka film as sung by the late Gene Wilder, who passed away just after the album was released.

"I included 'Pure Imagination' as a tribute to my own childhood dreams and aspirations, and as a statement that every adventure begins in your mind...what a voice Gene had, and that mischievous twinkle in his eyes." WANDERlust entered that September as the number one added album to stations on JazzWeek charts.

Her next release, RETRO Trilogy, was announced as a three EP set of pop-music covers done in jazzy arrangements. Each EP covers a decade and will feature six songs. So the first EP deals with the 70s and showcases Tucker singing material by artists such as David Bowie and Paul Simon, the next one includes 80s covers of Tears For Fears and the like, and the final decade is represented by her interpretation of Beck and others.