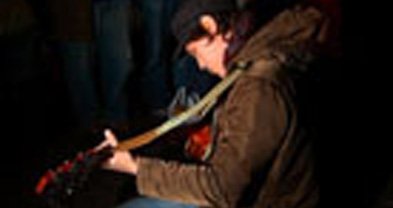 If you like the Beat writing of Kerouac or spoken-word essays by the likes of Henry Rollins and Eric Bogosian, then Adam Gnade may be your cup of tea. If you're accustomed to innocuous pop music, then Gnade's stream-of-consciousness rants (set to a slight musical backdrop by drop-in players) may be off-putting, filled as they are with rotting bodies, anxiety attacks, and stories of helpless souls on hopeless quests (often involving drugs). "Sometimes I think people hate passion," he says. "Or are afraid of it."

Asked to describe his music, Gnade says, "For someone who's never heard it, I'd say the louder songs are like a midnight head-on collision on the 70 west -- the sounds of cars hitting cars, metal crunching, glass shattering and spraying across the highway -- then silence, followed by God and the devil trying to figure out which one gets you. The quieter ones are like [Led Zeppelin's] 'Going to California' played by big-rig drivers or sad waitresses.

Many of the characters populating Run Hide Retreat Surrender are based on locals. "Half the record is about San Diego," he says, "and the other half is about escaping it."

Also in 2006, he issued a set of limited-run experimental albums (We Are Bones and Ghosts Down Stone Walled Wells and 2) expanding on his "talking songs" idea before signing a UK label deal with Drowned in Sound (home to Metric, Martha Wainwright, Kaiser Chiefs). Drowned in Sound released Gnade's EP, Shout the Rafters Down! in Nov 2006, after which he toured Europe in support of the record. DutchMoney Books is releasing a book version of stories surrounding his albums' characters called Hymn California.

Gnade recorded a track with Faux-Hoax in mid-2006, a band featuring Dave Allen from 1970s UK punk act the Gang of Four, John Askew from Tracker, and Danny Seim from Menomena. His current band is called Adam Gnade and the Confederate Yankees. Recent U.S. and U.K. radio singles include "Hymn California," "Room for Three and the Bayou Summer," and "We Live Nowhere and Know No One." Gnade also recently appeared as the "Silent Kid" in the indie film Loren Cass.

2007 saw a two-month U.S. tour, a five-week tour of England and Scotland (alongside Youthmovies, Jonquil, House of Brothers, Blanket, and Eugene McGuinness), and the release of Honey Slides, a collaborative EP with Youthmovies on the Try Harder label.

Though he usually records and often performs under his own name, Gnade's not exactly a one-man band. "I hardly ever play shows alone. When you have a six-person lineup (guitar, keyboards, saxophone, musical saw, vibraphone, drums), explaining why this considerably large group of people is called 'Adam Gnade' instead of, like, the Cars or the Babys or the Somethings, is hard. People think if you're billed under one person's name, it's gonna be one guy and a guitar, not six people and a shitload of weird instruments."

During his 13 months editing Fahrenheit magazine (published May 2003-July 2004), Gnade formed a lot of opinions about local performers. Today he says, "Right now, most San Diego bands that are doing well are on a mainstream pop level. Jason Mraz, Switchfoot, Louis the whateverteenth, fuckin' P.O.D....just atrocious, vague lyrics, hokey singing. I feel like the Dixie Chicks when they said the president made them ashamed of being from Texas. Hearing retarded garbage like Switchfoot on the radio makes me wanna set myself on fire. The real music in San Diego is played at places like the Voltaire space and house parties. Why would somebody wanna hear Jeff Spicoli from Switchfoot sing unoriginal, middle-of-the-road guitar-rock bullshit when they could lose their mind to something like Business Lady or Dmonstrations?"

Regarding upcoming plans, he fixates far into the future. "I want nothing more than to retire to a farmhouse in Kansas and make music with my friends and family. There, I'll renounce terrible shit like the Internet, TVs, phones, fashion, iPods, sports, airplanes, meat, cops, scenes, and wear homemade clothes and shoot guns off my porch."

As of 2010, Gnade was living in Portland, Oregon. He published his debut book, Hymn California (DutchMoney Books), and had several upcoming musical releases and a novella in the works.

In early 2011, his label released a new rarities compilation, From Farmhouses to Tour Vans. In late 2013, he played at England's All Tomorrow's Parties music fest, happening November 22 through 24 with a massive bill that included Dinosaur Jr., Television, Godspeed You, and Black Emperor.

In 2017, in the spirit of his other works such as AMERICANS, Greater Mythology Blues, and Locust House Gnade collaborated with Planet B for Life Is the Meat Grinder That Sucks In All Things, a prequel to Locust House featuring minimalist jazz percussion and landscapes of sweeping, windy Eraserhead-esque ambience. Plan B features Gabe Serbian (the Locust, Head Wound City, Zu), Luke Henshaw (Sonido de la Frontera, First Power Crew) and Justin Pearson (The Locust, Retox, Dead Cross, Head Wound City).

Early 2018 saw the release of Voicemails from the Great Satan, a collaboration with musician Demetrius Antuña that Gnade says "forges a soundscape for all of our fears and frustrations in Trump’s America, as well as a voice for our ghosts." It spawned the Hunter Seaton-directed "Ghost Ship" video, a short (less than two-minutes) film concerning the fire which broke out around a month after the election in an artist warehouse in Oakland, killing 36.

"I remember following it on the news waiting to see who was safe," Gnade says, "thinking 'No, not this, not now.'" From there, the lyrics are about the grim, nightmarish reality that set in after the election. "Demetrius and I were just talking about this, how we're less hopeful than we were when we wrote the album. It's not supposed to work that way, right? Will we give up? No, but I think a lot of us are tired and hurting pretty bad and waiting to see what's next. In the meantime, we're gonna fuckin' fight."

The story in the spoken (or often shouted, screamed) lyrics was Gnade's attempt to show "the collective American breakdown we witnessed after the election. We fell apart. But it's still happening. I feel like half the people I know are fucked up on some weird Trump-induced PTSD."

Wait -- both Godspeed You, AND Black Emperor are playing? Those two bands NEVER appear on the same bill!