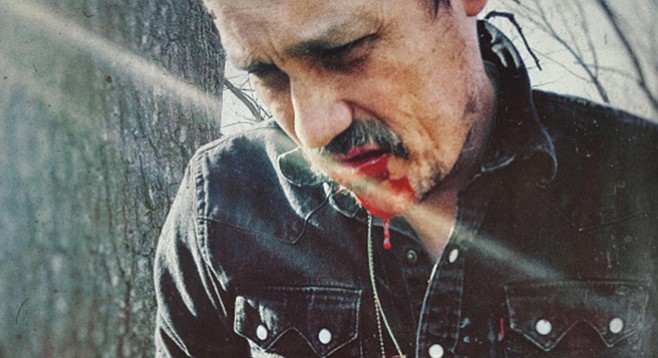 “‘America,’ in the post-colonial sense, was a slaughterhouse from the get-go.”

According to Adam Gnade’s latest album, Life Is the Meatgrinder That Sucks in All Things, recent American history is split into two distinct parts: before and after September 11, 2001. The spoken narrative serves as a prequel to his novella Locust House, a fictional account that follows several characters to and from a wild living-room concert in early-2000s San Diego.

Released by Three One G Records as a limited-edition cassette, Meatgrinder’s side A opens with whimsical descriptions of Golden Hill and story snippets that take the listener on a disembodied romp through Fashion Valley, Mission Hills, South Park, Hillcrest, Mission Beach, and the psyches of Gnade’s wistful subjects. His candid, quavering narrations were recorded on the farm where he lives in rural Kansas and then scored with the ambient compositions of San Diego trio Planet B, featuring two members (Justin Pearson and Gabe Serbian) of the Locust. Side B contains six variations of Meatgrinder’s “talking songs” with Gnade on a homemade four-string tenor guitar. Gnade established Hard Fifty Farm with a few friends in 2010, but San Diego lurks as a far-flung muse, informing his work across a yawning expanse of geography, memory, and meaning.

CD: What were you doing on 9/11/2001? What was your initial reaction? How have your thoughts on that event changed? How has America changed?

AG: “The morning of 9/11 I was up all night working on a deadline in Clairemont, I think for the U-T’s old online edition. Was actually living in Portland at the time but I came back for a week to visit and a day later it happened and I ended up staying for three years. That week I was staying with family and when the news hit, someone called me into the room because they weren’t sure if what was happening was actually real. We stood there together and watched the second plane hit the tower. I think we stayed in that room for a solid week glued to CNN. This was a big turning point for America, of course. It was our Kennedy assassination, our loss of innocence.

“I’ve always been interested in moments before and after a big change. My book Locust House is about the time after 9/11. Meatgrinder is about before, directly before; it takes place September 9th. My feelings about this country were changed by 9/11 and they’ve only intensified since then. I love America. I love the land and the people but I absolutely hate the government and our history of imperialism and genocide. We built this nation on the backs of black folks and we soaked it in Native American blood. ‘Make America great again’? ‘America,’ in the post-colonial sense, was a slaughterhouse from the get-go.”

CD: What’s your relationship with San Diego these days? Will we ever get to see Adam Gnade & the Hot Earth All Stars headline the Casbah?

AG: “I love San Diego and of course a huge part of my work deals with stories set there but I won’t move back until I’ve made my fortune. I mean that in the fairy-tale sense. In those stories, as we know, the protagonist leaves home to seek their fortune. In my case I don’t mean money or stability or anything like that; I mean fortune in a greater sense, in a meaning-of-life sense. When I’ve figured that out I’ll move back home and we can throw a huge parade down Kettner leading right up to the Casbah.

“San Diego is deep in my blood. I was a gothy romantic beach kid. The sunshine and weird darkness is part of my DNA, and my stories are either about San Diego or about San Diegans on the road or exiled or just living elsewhere. I left home, but my own creative and personal world is still anchored there. Before I left for the second time, my friends and I ran a weekly paper there called Fahrenheit San Diego. Jessie Duke, who founded the paper, now runs Pioneers Press, the publishing house that puts out my books. Elizabeth Thompson, who was the paper’s calendar editor, now lives on the farm in Kansas with me. Last week I asked her to marry me. That’ll happen this fall. And of course my music is released by Three One G, which is a massive dream come true.

“Hemingway said to really write about a place you’ve got to move away. I’m not sure if that’s true but it’s the road I’ve taken.”

AG: “I’m working on a bunch of songs for the summer tour I’m doing with Morgan Eldridge and Chris Clavin and figuring out Black Sabbath solos and riffs to drop into the bridge as a joke because we’re basically living ‘War Pigs’ and other dystopic hits.”