Action Andy Rasmussen has played with the the Bomboras, the Loons, Sleepwalkers, and Haunted Honky Tonkers, who were later renamed The Return of Action Andy.

“I do not seek an audience, I do not seek fans, nor any notoriety,” says Action Andy. “This soul of mine leads me to a place where I can pick up, put down, drink up, and settle it all in song. If I can make music with friends, I know my life will be well spent.”

In 2011, Rasmussen recorded a new album called High and Lonesome at Earthling Studios, released by Relampago-go Records under the band name Action Andy & the Hi-Tones in 2013.

An electrifying blend of Americana and alt-country styles, High and Lonesome shifts into straight ahead rock & roll, a touch of Latin, and minor key moves. Part concept album, it tells the tale of a man's search for Love and Redemption, with the pitfalls, perils, and trials that occur along the way.

Spring 2016 found Action Andy & the Hi-Tones backing up Tex-Mex legend Augie Meyers on several southern CA dates (including April 30 at Kensington Club), with guest drummer Bob Osuna (the Sleepwalkers) in place of Victor Penalosa, then on tour with the Flamin' Groovies.

Action Andy's album "High & Lonesome" was released as Action Andy & The Hi-Tones on 10-31-2013 on Relampago-go Records. His music can be found through Facebook and Bandcamp: http://actionandythehi-tones.bandcamp.com/ 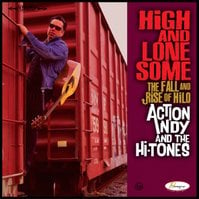