Cornbread and biscuits. All the way home last night I was craving cornbread, butter and honey or good biscuits with butter and jam. I knew i was having the thawed out vegetable soup i made a few weeks ago -```weight watchers friendly, and tastes good - but i wanted the carbs, and the creamy and the sweet to accessorize it.

Hopping off the train, I exited the same time as my bicycle riding La Especiale Norte friend. I call him that because I ran into him and his wife there once a couple years ago, so it became a basis for food conversation. I mentioned the cornbread and biscuits.

Let me tell you this, I said. Went over a friends house for dinner a year or so ago. She'd made a "beef stew" recipe she found in Sunset Magazine. How can I describe it? I still dream about it. In addition to the rich broth and flavor, it had blue cheese in the sauce that added that something special, the stuff of dreams.

A couple weeks ago I went through this very same dilemma. And I had one of those Jiffy corn muffin mixes that just needs the egg and isn't half bad when you are jonesing for da cornbread. I didn't have the eggs however, so i threw on something I never should wear outside the house and raced across the highway to Ralphs. A place I never buy from. The most depressing selection of produce I've ever encountered- think they turn the sprinklers on just one or two too many times during the day, it all rots out or molds by the time i get to it.

Back to the eggs- So i run in, get the eggs, and didn't meet Prince Charming, thank god. Not in that outfit. I rushed home, mixed it up and popped it in the oven. Minutes later, mouth watering I tilted the oven door open and ###@@@ the little muffin cups were flat, they didn't rise. ###@@@. I looked at the box and it was a year or so out of date (hey, that's what happens when you buy too much back up stuff)- it wasn't rancid, it just didn't have the energy to rise. I tried eating one or two of the dry flat disks, but ended up throwing them out, so disappointed.

A few days later I remembered the biscuits, bisquick biscuits. Raised on em, love em hot with butter and honey. Still have some of the honey from the bees in my fence. yum yum.

Pulled out the bisquick had some milk so made them with milk instead of water, flattened out the dough with my hands, love to make the little circular cuts with a water glass even though i know i have the metal biscuit cutters in a drawer somewhere. Done, beautiful, stick em in the oven.

Surprise surprise, 10 minutes later they weren't even browning. So i thought, give em a few more minutes. In ten, i checked again, and they were barely browned, and not rising. Flat as a biscuit, what? Once again, it was too old. It was in an air tight container, but geesh, I couldn't really tell you how long I've had it.

So yesterday when i had those cravings again, I thought of where i could buy them, already made. Encinitas cafe, don't feel like driving that far- Urban Solace- same thing, i want em but don't want to get in the car and drive three exits south and through severall signals when i shouldn't be eating them anyway. Marie Callendars. They closed last year. The one near me anyway.

So into Ralphs I go. Damn them. I hate giving them my business. Into the bakery section where i found either an 8 inch square cornbread cake, or a round plastic bin with , i don't know, maybe 24 little corn muffins. So I had 8 petit muffins with my soup last night, and am trying to keep it to 6 tiny muffins tonight. Then i think i better freeze the rest for a future craving.

Ah my life, a facinating slice of mediocre. But wait, perhaps I'll start with a glass of wine. Yes, that's it.

Ordinary makes the world go 'round. Where would we be without it?

i want ordinary cornbread ...if u don't have time or the inclination to make it Vons just off Los Coches Road has cornbread with or without jalapenos in their bakery area 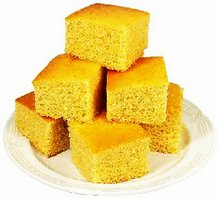