Waking from a dreamless sleep, consciousness thrust its way into her body, rudely interrupting her plan to sleep in. It’s 3am and the house is mostly dark, except for ghostly shapes rising from appliances and night lights, and the reflections of a street lamp on the skylights.

“I’m here he said, and although there was no sound, it was if he was sitting on the bed next to her. I know, I replied, not surprised really- I wonder why.

Am I dreaming? No, there was no sense of a body in the room only the scent and a slight prickling sensation that confirmed that on some level, he was here with her. It was almost like a ceiling fan was turned on, a breeze from some long forgotten wind. It wasn’t logical but it was real. She knew his body was at least 50 miles from where she slept- on Chuck’s boat. A moment later he was gone.

We’re going out on a boat from Marina Del Rey on Saturday, wanna come? Cindy chattered on about the plans she had made and encouraged me to tag along. Great crowd, lots of money, good food, and wine, champagne even. Not a sailboat, a stinkpot, a motor yacht. This was a social day, not a racing day.

I left the house at 9 and headed up the coast to the marina. Hit a little bit of traffic, and got off near Venice, winding my way past design studios, sushi bars, and real estate offices, commercial buildings and wood framed restaurants. For all the money around here, it’s not very pretty, I thought to myself, but perhaps it’s just here on the main drag.

I parked the car and headed towards the dock where I could see that the party had already begun. At least 15 people milled around the boat, each with a glass in hand, dressed for cocktails, but with boat friendly shoes. My kind of crowd, fun but not stupid. Boats on the water deserve respect, and when you’re heading out into the ocean that is even more critical.

Finally time to cast off, and as we motored into the main channel on a beautiful sunny day, the wind did us a favor- kicking up negative ions that injected life and laughter into the morning. My favorite place on any boat is up at the very front on the bow sprit. There is nothing I love more than sitting there on a sunny day with the wind blowing directly in my face, my hair thrown about like spun sugar in a cotton candy machine.

It’s so invigorating, makes me feel so positive and alive and cool- really, really cool and blessed to have the kind of life where I get invited to do this. I can take the intensity for about a half hour, and then have to take a break, to refill my glass, to attempt to calm my hair, to be social. I’m not much for small talk, get bored easily, and polite conversation never holds my interest for long, even listening to an attractive man, although I give those moments a little more attention, at least the first time.

Hey Sarah, where have you been? Cindy yelled. The group she was sitting with all turned their heads in my direction and smiled: Three men and a woman I didn’t know. Why does she look familiar? The oldest guy, Ted, was a handsome spunk, dressed casually but expensively. I’d seen him at other club events. The man next to him, Andrew, was 20 something, spiked thick blonde hair, good teeth, white polo shirt, board shorts (over Speedos I bet); the third guy was not very tall, with brown skin, a gorgeous smile, laughing eyes, hot body- hmmm, Cindy introduced him as Miguel. He looked at me lazily. Hello, he said slowly. Hi, my voice squeaking just a little, and as a flush appeared, and my mind when blank I quickly broke eye contact and focused on Cindy.

Looks like you’re starting the day right! Surrounded by all these handsome men, I laughed, and they all smiled back at me. Nice. Cindy said, this is Debbie, and I remembered where we had met- at my ex’s apartment late one night. We both figured it out at the same time, and our expressions read like a mirror- from smile to snarl and back to smile. How are you, she said. Lovely I responded.

Debbie was sitting right next to Miguel, and it was obvious she was interested, she was learning in his direction, her breasts sending out a signal that was loud and uncensored. Miguel jumped up and grabbed my glass- you need a refill,he said, allow me. I looked up directly into the sun, and all I could see was his smile, I shielded my eyes and gave him a flirtatious smile. How thoughtful I said, my voice trailing to a whisper, eyes lowered, and the flush again.

As he walked towards the bridge, my eyes followed him. In an effort to rejoin the group, I tried to focus on the conversation. Debbie was openly unhappy at the sparks flying between Miguel and I, but Cindy missed the whole thing.

So Andrew, why do you look familiar? I said. I’m Sammy’s son, he said, remember me? Oh my God, I thought, Sam Kieran’s boy, I perched on the rail and balanced myself with one foot on deck and one on the seat and quickly regained my composure. To be continued.

u should put this in the fictionwriter blog when it's done...the short story thingie!!!

here's a Speedo we can all get behind...lol 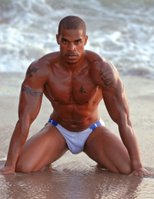 All right, enough with the Speedos already.

Hey nan, will do- i requested a password but never heard anything back....

well ask Mindy how she did it...she had trouble at first 2 Sharon