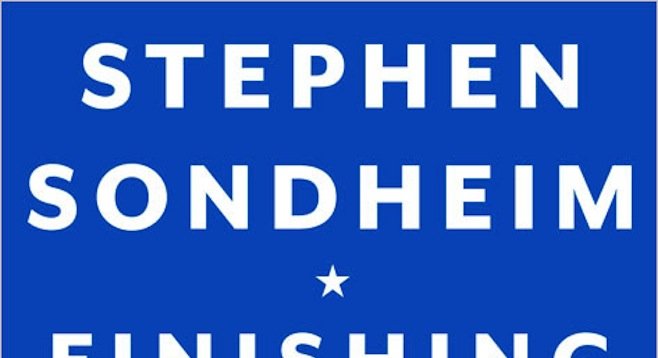 In 2010, the year he turned 80, Stephen Sondheim did a surprising thing. The author of umpteen musicals - including his controversial Assassins, which opens at Cygnet Theatre March 23 - published Finishing the Hat: Collected Lyrics (1954-1981) with Attendant Comments, Principles, Heresies, Grudges, Whines, and Anecdotes. The book casts a cold, critical eye on his writing.

Usually when writers discuss their works, they fall into one of two ruts: extol their output to the empyrean; or scourge it with undisguised self-loathing. Sondheim does neither. As in Ingmar Bergman's remarkable The Magic Lantern, a brutally honest, bottom line voice persists throughout. Sondheim confers praise, where due, and blame. But he always uses the latter as a teaching tool.

Almost a foot tall with a shimmering metallic blue cover, Finishing the Hat looks perfect for a coffee table, next to a chic magazine or the latest hip journal. Read it, however, and it's like savoring a steaming cup of medium-light Ethiopian Beleaktu Yirgaheffe.

Sondheim gives a master class on writing lyrics for musical theater. He describes the context for each, provides background and anecdotes, and then goes at West Side Story, Gypsy, Sweeney Todd, and others with the scalpel of a surgeon.

He lays down ground rules. Number Six: Although Oscar Hammerstein II was his artistic mentor for life, and "substitute father" when Sondheim was a teen, he is "not my idol."

Sondheim lists the sins of lyricists: among them "substituting rhyme for character," "redundant adjectival padding," and, "the most pervasive of all theatrical lyric-writing: miss-stressing." He provides examples from his works and those of the masters of the genre.

He also takes each to task. Even Cole Porter, one of whose weaknesses, Sondheim says, "is a sniggering adolescent penchant for double entendres so blatant they become single ones."

Along with being an autobiography and history of American musical theater, the book feels like reading his lyrics with Sondheim at your side. Suddenly he'll stop you. "You liked that? Oh no. Watch." And proceeds to dissect flaws that less-trained eyes would have missed.

Some confessions are striking: "Chekhov wrote 'if you're afraid of loneliness, don't marry.' Luckily I didn't come across that quote until long after Company (1970) had been produced. Chekhov said in seven words what it took George (Furth) and me two years and two and a half hours to say less profoundly."

In another, he debunks the "time-honored shibboleth" that writers should only write about what they know. And because of the claim, "it's only natural that playgoers, along with moviegoers and in fact all fans of narrative fiction are tempted to look for autobiographical hints about an author's emotional life in his work."

Not so. "I don't create these characters. The book writer does. What I do is inhabit them as best I can."

The only song he ever wrote "which is an immediae expression of my personal internal experience"? - Finishing the Hat, from Sunday in the Park with George.

The "hat" isn't finished. Finishing's actually the first of a two volume work. Look, I Made a Hat begins with Sunday in the Park and covers Sondheim's lyrics from 1981 to 2011.