After losing my way with smartphone apps, Garmin gets me back on the path of righteousness.

I've reviewed a few running apps for smart phones but there is one huge problem they all have in common, the phone itself. While the apps are all slick and wonderful, the phone is not wonderful while running.

While running it is difficult to find a good place to keep the phone. The arm sleeves are useless because you can't check your time, distance, and pace without fighting the glare, contorting your neck and shoulder, and disrupting your flow.

If you carry the phone in your hand you still fight the glare to see the screen plus your hands are sweaty and smear the screen.

Two things fix this. One is Craigslist and the other is a used Garmin Forerunner.

I first bought a Garmin Forerunner about four years ago for $299. It was the 205 and it was about half the gadget the 405 is, as their numerical naming would imply.

I lost the 205 during a move and have made due with free apps since then.

I've read the user guide but today is a rest day in my training so I haven't taken the new guy out for a spin yet. However, I am wearing it.

The 405's battery life is so long that it can be worn as a wristwatch for days at a time.

The first Garmin I owned was among the top ten things I've ever purchased. It changed my life, and we'll at least it changed my running life but what's the difference?

We'll see how this one works out. 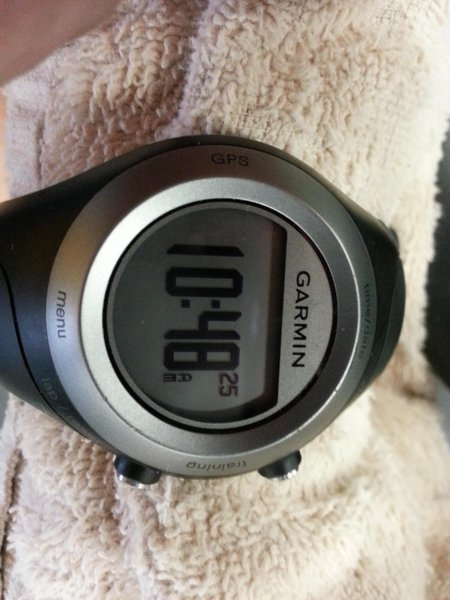