VH1 Celebrity Brittany Skipper Knows How To Get It Right!

When it comes to reality TV sometimes its not so reality, and the people you meet are nothing like the way they were on the TV shows or none of it is reality. San Diego actress & model Brittany Skipper from the new VH1 show what you see, Is what you get!

The new show is not your typical reality show as a matter of fact it has a touch of humor and few parts that might make you shed a tear or too. Brittany is not only beautiful and smart but she is down to earth which is a rare quality for someone who has done as much as she has. It's not often that you have a chance to talk to a celebrity that is so well grounded.

Brittany has really found a way to balance her career and family life well. She has a great positive attitude on life and family. In talking to her she mention her family on many occasions and the support they have given her while she has been pursuing her goals and dreams. She

Brittany is a Triple Threat but, you didn't here that from me because she is so humble about everything she know how to do I actually had to look it up to find out about it. Who knew? I guess she just like to leave a little mystery to it all and it shows.

When I asked her about what advice she had for anyone who want to be on a reality show she said "Be yourself" and Know who you are and that is definitely what she does. The way she was on the show was no different than she was in person which was really refreshing.

Brittany is a woman on the move and so you wanna keep you eyes out on what she will be doing next in San Diego and abroad. She will be making local appearances at various functions and events. Its kinda cool to have one of our own on some one of the most popular TV channels in the world! Just make you proud to be from the city of San Diego. Check out the new “Making Mr. Right on VH1 what Brittany has coming up in San Diego by visiting her website at http://www.britskipper.com Watch the video interview Here http://www.youtube.com/watch?v=X_yYnW6O9fM to see what she had to say, or read the interview below.

How did you get started in acting?

I am actually a really horrible actor but, I started as a news anchor and that is something I've always wanted to do is be a tv host or a anchor. I started doing that after college and life happened, I got married had a baby and found myself not married anymore many door opened. I was thinking i was going to be a stay at home mom for the rest of my life and here I am on Making Mr. Right with so many possibilities for tv hosting.

How has being on the show changed your life?

Doing reality is alot different than being an actor, people really get to know you and what your all about. Thats what I have learned to love about reality TV, it has opened a lot of doors just from getting to know me personally by watching me on the show, they get to learn what I am about. Because of that so many people willing to help in in anyway they can way they can.

How do you remain humble and down to earth?

I feel like having this op I am just really lucky. I have worked really hard done a lot of little small roles in the background of a music video or just something where no one knew my name and I was just the girl in the background. I feel blessed to have this opportunity and I don't feel I deserve it more than anyone else did. It really just kinda fell in my lap and so for me I feel like should have to be so grateful for the opportunity because I know how hard it is in the entertainment industry a lot of it is luck and a lot of it is who your networking with and to have an opportunity like this doesn't come along everyday so I am just trying to soak it all in and be grateful for every moment.

What is your advice for single mom's who want to act or model?

The entertainment industry doesn't favor moms and family they favor young & sexy and its unfortunate. But, there are so many avenues to go in if you are a mom and its all about finding those opportunities or if you do have those traditional values. For me, I turned down a lot of opportunities that were bikini or playboy that might have asked me to compromise my values as a mom and just as somebody who a christian. I feel like its been so import ant for me to take opportunities that let me shine in a positive way and so the more you do that the more people learn what kind of work that can and can't give you and so you'll find your way. If you wanna do it, what you put into it is what you'll get out of it.

Of course, I think the the decisions you make from this point on are what matters most. I know a lot of my friends and I know a lot of young models they start out just taking whatever jobs they can. Sometimes, they feel like Ok... well I have to take this job even though it's compromising my values, I have to take cause that’s whats available and its not necessarily true. If you look hard enough you'll meet the right people and you'll find the avenues that will point you in a good positive direction. Even if its starting today, doing that I think anyone can turn an image around to be something positive. The entertainment industry and the media is such a powerful force if you can use that influence you have in a positive way I think you'll stand out more than just a girl who is just dressed sexy.

What would you recommend for people who are new to acting and want to audition for a TV show.

What are your future plans ?

San Diego is definitely my home, I was born and raised here and so I'm a San Diego girl. I always want this to be my home base. I do love traveling do if a job takes me one place or another I am always open to that. I started out news anchoring like I was saying before and I would hope I go in the direction of TV hosting.

I do have a kids entertainment company here in San Diego called Royal Entertainers and we provide princesses for birthday party and all my girls will go out dress as princesses and sing and perform for kids as parties. So II will be continuing to do my business as a Royal Entertainment with princesses that’s just kinda my comfort zone. Hopefully I will take on a few TV hosting gigs something I have always done even before “Making Mr. Right” it will be exciting to see what comes along.

How did you get into singing?

I feel like in one way or another I have always loved performing whether it was TV hosting and anchoring or singing and dancing. I feel like I've kinda of gone down all sorts of avenues of entertaining. I used to sing and dance for a local group called “Music Machine” down in Chula Vista. We toured all over the world and in different countries,even nationally and it was just something I loved to do.

It was sorta like “Glee” but, back then it wasn't that cool now “Glee” is super cool but back then it wasn't. I was like the nerdy one, it was just a passion of mine. I feel like as of now I don't want to spread myself too thin. So I haven't been focusing on singing and dancing even though it is something I love to do, I'll just stay in my living room and just do dance 4 on the TV.

Will you ever release an album?

It's always crossed my mind but, something I have never pursued recording a song. Lately it hasn't been on my priority list but, you just never know, maybe?

I would say right now my biggest focus is “Making Mr. Right” on VH1 Sundays at 9 pm. If you don't have cable you can watch it on line. VH1 like comments and maybe might even help me get a second session or a hosting job. You can tweet Brittany @britskipper on twitter. 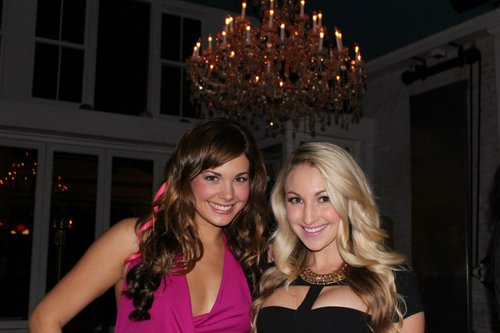 Here is the video interview http://www.youtube.com/watch?v=X_yYnW6O9fM