A filing yesterday with the California Secretary of State's office shows that Torrey Pines-based General Atomics - maker of the Predator and Reaper drones, uranium miner, and proprietor of an array of contaminated nuclear sites left over from the cold war - has given $5,000 to the county Republican Party, the first of what some political insiders believe could be thousands more for the GOP's big-spending effort to elect city councilman Kevin Faulconer mayor.

The General Atomics operation is run by two brothers, Linden and Neal Blue, whose careers stretch back to the late 1950s and '60s, when the U.S. Central Intelligence Agency was engaged in a life or death struggle against communist dictator Fidel Castro in Cuba.

Yale alumni and Air Force veterans, the brothers are believed by some left wing critics to be members of the infamous Skull and Bones secret society from which the cream of the nation's intelligence leadership emerged. 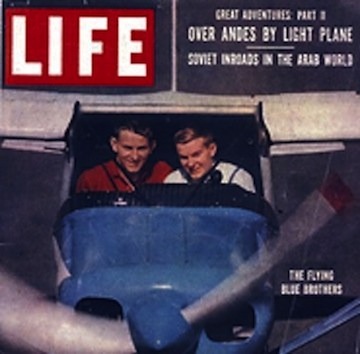 Linden Blue and an associate were forced down in their small plane by Castro's forces over Cuba and briefly jailed in the days immediately preceding the Bay of Pigs invasion in 1961. Since then, the brothers have taken over General Atomics, where they developed the Predator drone and other lucrative high-tech weapons now being marketed in hot spots around the world.

In addition, the pair ride herd over a portfolio of radioactively contaminated nuclear processing sites, including the old Schwartzwalder Mine near Golden, Colorado and the Cotter Corporation mill in Cañon City.

A staunch Republican, Linden Blue has long been a critic of Obama and the "entitlement state."

"It is instructive that President Obama employs the European model of entitlement, regulation and income redistribution as his guide," wrote Blue in a November 2011 commentary with Herbert London, President Emeritus of Hudson Institute and Professor Emeritus of New York University.

"It may be one of the few examples in history when a blatantly failed system is employed as a model for success. As the U.S. borrows more than 40 percent of the federal budget this year, we are perilously close to emulating the worst of Europe."

"For decades the entitlement psychology has relentlessly decoupled the biblical and basic understanding that in order to eat, one must be productive."

"Many people, far too many people, believe the role of government is to care for them," the authors added. "Capitalism can create wealth, but it also creates invidious comparisons (read: envy)."

Blue is also firmly against the legalization of marijuana, advocating compulsory testing of the hair of high school students for banned substances.

"If kids know there is about a 99 percent chance they will lose, they won’t take the risk — especially on things that are important to them like a driver’s license or getting a job."

"We need to make this work for our kids and for Latin Americans, where the U.S.’s drug appetite has stimulated international cartels and contributed to thousands of deaths." 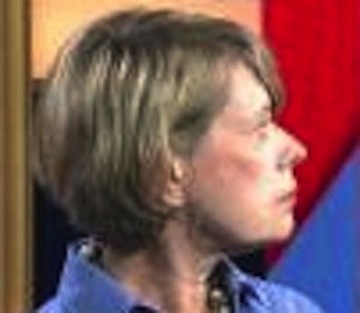 This July, Blue's main squeeze, retired rear admiral Ronne Froman, was drafted into the successful effort to topple liberal Democratic mayor Bob Filner, a big friend of medical marijuana, from power. Froman appeared at the studios of San Diego State University’s KPBS to allege that Filner had sexually harassed her.

“He stopped me and he got very close to me. And he ran his finger up my cheek like this and he whispered to me, ‘Do you have a man in your life?’” Froman said. “I jumped back. I was very, very startled. And I said, ‘Yes, I have a man in my life.’

"And he said, 'who?' And I said, ‘Linden Blue.’ He says, ‘Oh, of the Blues Brothers?’ And he says, ‘Maybe we can get together some time and have lunch and he can support me for mayor.’"

Every time I read that Ronne Froman story, about her "harassment", I groan. She is an embarrassment. And showed it in most of her past jobs.

I always enjoy reading the political philosophy of corporate welfarists on the shortcomings of a socialist state.

Monaghan: yes, always a treat to see a textbook example of cognitive dissonance.