Loss-prevention-officer Chris said two women refused his requests to give up their stolen goods, even after he showed them his “badge.”

Several Walmart employees pursued Megan and Chastity through the parking lot after they were allegedly seen putting merchandise into a large purse. When the first woman passed through the front doors of the store, the second woman grabbed employee Chris and yelled to her partner, “Run!”

“She physically stuck her arm out and grabbed my shirt,” witness Chris told a judge at a hearing last month. The alleged theft was the month before, in August.

Chastity Chapman, 41, and Megan Landine, 21, were accused of robbery and shoplifting.

In the parking lot, store employees demanded that the women hand over their purses and come back into the store. Chastity gave up her purse after a short struggle. “She took her cigarettes out of the purse and let me have it,” Chris testified.

The second woman, Megan, was scrappier than the first. According to the witness, when the two women got to the far edge of the parking lot, Megan turned and confronted her pursuers. “At that point, she pulled her hair back in a ponytail and said, ‘I’m gonna f**k your bitch up!’” Chris understood this to be directed at one of his female associates, also a loss-prevention-officer for Walmart.

“At that that point I stepped in front of both females.” That was when he got punched. “I was very positive she hit me twice.”

Chastity and Megan escaped in a Chevy Impala that was parked at that remote area of the lot, beyond range of the store’s security cameras. But an employee got a photograph of the Impala’s license plate and phoned the Sheriff.

It was determined that neither purse carried by the women had a wallet or credit card or money or any identification at all. But there was stolen underwear and ink cartridges in one purse, according to testimony.

According to the plea deals read by Honorable Judge Aaron Katz, each woman expects 180 days local custody at her sentencing on November 14, in San Diego’s North County Superior Courthouse. 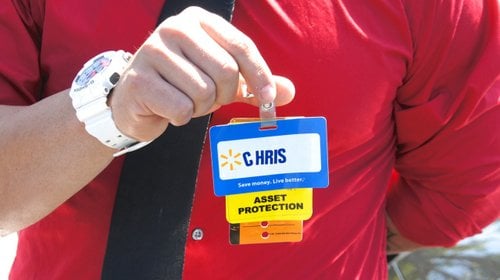 Chris showed his Walmart badge to no effect. Photo Eva

Megan Landine was tearful in court, to no effect. Photo Eva. 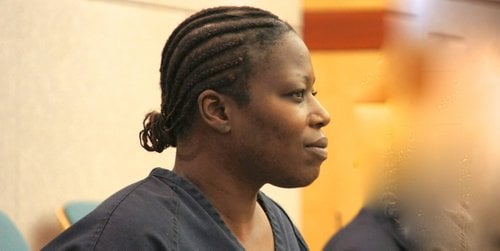 Those pictures tell a story that words cannot convey! It would be interesting to know which of the No County Walmarts was the setting for this. We now have one in Escondido, one in San Marcos, one in Vista, three (or is it four?) in Oceanside, one in Encinitas, and one in Poway. Plenty of pickings for professional shop lifters.

Both are thugs, one smirks so we know how much respect they have. Enough said. Wonder how many strikes each has? Their next run in with the law could be much worse if they know they'll be going away for a long stretch in the big house.

180 days? they will serve less than half, unless the jail is full, then be relesed early to have a laugh and get back to stealing. The DA sold out the public with plea bargains, a n assault charge should have bee made.

"Harshness towards individuals who flout the laws and commands of state is for the public good; no greater crime against the public interest is possible than to show leniency to those who violate it." Cardinal Richelieu