Paul Pfingst, a prominent criminal defense attorney and a former District Attorney for San Diego County, might face criminal investigation by California’s Attorney General, according to a prosecutor.

“Days after the murder, Mr. Pfingst removed $27,000 to $30,000 in cash that was found in defendant’s ‘get-away’ bag, prior to seizure by police,” the prosecutor stated in a 32-page document. “The money Mr. Pfingst took is evidence relevant to this crime.”

Paul Pfingst was retained to represent a woman accused of murdering her husband the same day as the shooting, on August 7, 2012.

“Mr. Pfingst then assisted in the secretion of defendant’s ‘get-away’ bag in a garage attic,” the prosecutor claimed. “Mr. Pfingst never informed police about the ‘get-away’ bag or the removal of the $27,000 to $30,000. Instead, this information came to light months after the murder during the preliminary hearing. His actions are being reviewed by the Attorney General for potential criminal and State Bar violations.”

Paul Pfingst’s client, defendant Julie Harper, is accused of shooting her husband Jason Harper in the master bedroom of their Carlsbad home, while their three children watched television downstairs. The shooting occurred before 9 a.m. on a Tuesday morning and Julie Harper surrendered herself to police the next day, about 3:00 p.m. Wednesday. “Between the time of the murder and Defendant’s surrender, numerous items of evidence had been moved, removed or altered, including vehicles, cell phones, and the murder weapon,” prosecutor Watanabe stated.

After the shooting, Julie Harper reportedly met with her father and then they met with attorney Paul Pfingst, that same day. Before midnight, attorney Pfingst telephoned police and advised officers to do a “welfare check” on the second floor of the Harpers’ home at 2420 Badger Lane.

Four months later, during a hearing in December 2012, the father of defendant Julie Harper testified with a grant of immunity.

Witness John Cihak said that Paul Pfingst came to his Scripps Ranch home some days after his daughter surrendered, and together they inspected the contents of a blue backpack, which the prosecutor characterized as a “get-away bag.”

The backpack also contained approximately $30,000 cash, and all the items were replaced in the backpack except for that cash, the prosecutor claims.

Prosecutor Keith Watanabe stated: “Mr. Pfingst took physical evidence related to the crime (the $27,000 to $30,000 in cash) and converted it to his own use.”

The prosecutor further suggests that Paul Pfingst indicated a hiding place for the backpack. The prosecutor quoted the witness as saying that after Pfingst and Cihak discussed the dangers of leaving a firearm in the backpack, “it was at that point that Mr. Pfingst motioned to the garage attic and said, ‘Well, maybe you ought to put it up high.’”

“Specifically, Mr. Pfingst asked Mr. Cihak to ‘retain the bag in a safe place where it could not be interfered with by other people.’" Cihak said he did put the blue backpack in the garage attic, but it was discovered when police searched his home a second time, on August 16, 2012. Investigators insisted the backpack was not there when they searched the home the first time, on August 8, 2012.

Prosecutor Watanabe has also alleged, “Mr. Pfingst removed the cell-phone from its original location and brought it back to his office.”

On August 10, two days after defendant Julie Harper was taken into custody, investigators learned that Paul Pfingst had custody of her cell phone. “Mr. Pfingst refused to disclose how he received the cell phone,” according to the prosecutor. “He also stated he did not have any other evidence.”

The prosecutor asked a superior court judge, Honorable Blaine Bowman, to order Pfingst “to produce all contents of the backpack” including the cash and “to produce the murder weapon if it is within the possession of counsel or the defendant.”

The alleged murder weapon has never been recovered, the prosecutor said.

“Forensic analysis of the bullet removed from Jason’s body showed that it was not fired from any of the firearms recovered in this case,” according to prosecutor Keith Watanabe.

Besides the .32 semi-automatic found in the bag, a loaded 12-gauge shotgun was found in the Harpers’ home, in their master bedroom closet. Julie Harper also has a .45 pistol registered in her name, according to the prosecutor.

“The people intend to call Mr. Pfingst as a witness,” prosecutor Watanabe declared. The prosecutor suggested this creates “potential conflicts,” and stated that a trial court may remove defense counsel, even over defendant’s objections, to eliminate conflicts.

“I can understand why the prosecution would want a less experienced or capable defense attorney on this case,” attorney Paul Pfingst stated after a superior court hearing today, October 2, 2013. “However all of the evidence was handled according to decisions handed down by the California appellate Courts. If the prosecution has a complaint it is with the courts, not with defense lawyers.”

The prosecutor stated that he wants a hearing in which Pfingst will be questioned “as to his observations regarding the backpack and its contents as well as the circumstances into which it came in to his possession.”

The next hearing on this matter is scheduled before Honorable Judge Blaine Bowman on November 22, 2013, in department 12 of San Diego’s North County Superior Courthouse. 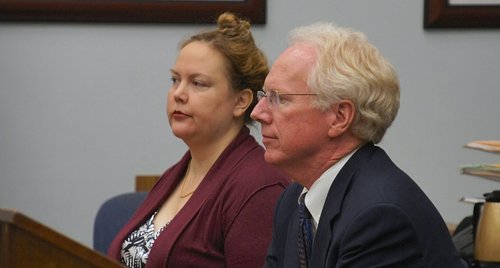 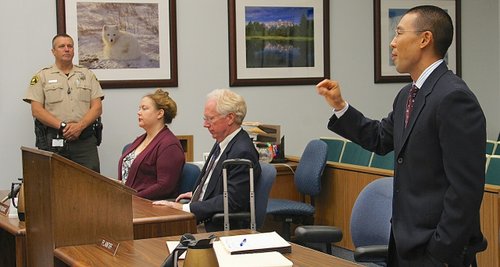 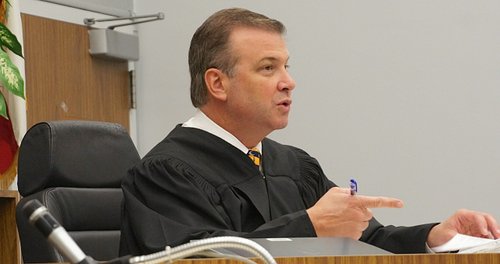 Pfingsto hasn't been doing all that well lately with his defenses. He might still be DA if he had not left a trail of folks who thought he was a crook. This is all getting "verrry interrresting." In fact, these accusations of his conduct may overshadow the prosecution of this bizarre case.

Since the prosecution has her cold, the only thing to be determined is the degree of severity of the killing. After a year of silence on this prosecution, the wheels of justice are finally creaking into action, and now we have the defense accused of complicity. Oh boy!

One thing we might note is that a year in the slammer hasn't slimmed Julie noticeably. Of course, what has she been able to do while incarcerated but sit around and eat jail chow?

The DA is probably trying to work a deal with Cihak: The DA goes easy on the daughter in exchange for Cihak's help in destroying Paul Pfingst. Dumanis probably wants to settle an old grudge by putting the kibosh on Pfingst's legal career.

While I have no good feelings for Bahnee, Pfingst deserves no slack or breaks when he falls into his ethical void. Go get him, Keith!

Julie Elizabeth Harper, 40, was able to post $2 million bail in mid-September 2013. She has been at liberty for some weeks, fitted with an "ankle bracelet" that is monitored by the bond company that posted her bail, according to well-placed sources. During the hearing October 2, the judge modified the conditions of Julie Harper's release, allowing her to travel to Orange and Los Angeles Counties, in order to "assist in her defense." Certain family members of the deceased man, Jason Harper, reportedly reside in those areas and it was stated in court that they are fearful of the accused woman. Julie Harper denies all charges. 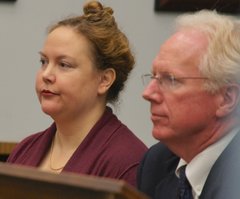 The premium paid to the bail bondsman used to be ten percent of the bond needed, hence she would have had to come up with $200,000, basically non-refundable. Apparently those costs are now negotiable, and can be less, but there's no doubt that plenty of money changed hands. Or, various family members (and friends?) would have had to pledge their assets, such as their homes, in the full amount. That seems unlikely. So, one would wonder where the funds came from.

Sounds more sensational than true to me. I have always believed Paul Pfingst to be an honorable man and an excellent lawyer.