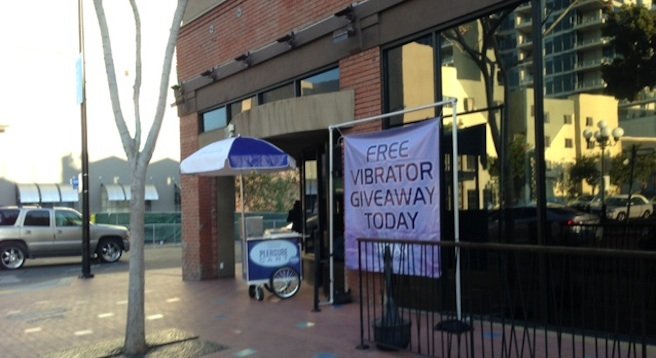 Trojan, the venerable maker of condoms, gave away $30 and $40 vibrators -- for men and women -- this afternoon from 2:30 p.m. to 6:30 p.m. at the Stingaree, which is billed as San Diego's hottest night spot. "The pleasure revolution that swept New York City, D.C., Chicago, Boston, Las Vegas, Miami and Seattle is on the road and heading to San Diego," boasted Trojan. However, spotty returns suggest that the event did not make a big splash. At my request, Matt Potter of the Reader wandered over and observed the outside, although he didn't go in. He said there were two carts, called "Trojan Vibrations Pleasure Carts," outside the front door There was a guard at the door, two bouncers, and two ladies from the company. Someone was telling passersby to come in and get a free vibrator, but there were few takers while Potter was observing. There was no line, "and usually there is a line around the block" to get into the place, Potter says.

During the giveaway, I called the club. The young lady answering said she did not know how the event was going. She shifted me to an events executive named Morgan. "I will not comment," said Morgan, whose last name I never learned. Later, I got a lady named Shannon on the phone and asked her how things went. She said she didn't know: "I was in my office all day." I asked for her last name and she thanked me for covering the event and hung up. I was referred to two people representing Trojan and neither called me back. From this scanty evidence, I conclude the giveaway was not a smashing success, but I could be convinced otherwise if anybody would talk with me.

Thanks to Matt Potter for his assistance and photos, one of which is posted above.

I've never been to Stingaree, but is there normally a line to get into the club between 2:30 and 6:30 on a Wednesday? It's time to move on, Don. We need you to cover more "penetrating" stories. (that's it--I swear, I'll quit now)

Ugh, ewww. And thanks for covering all the news fit to ... well, more fit than what passes for City Council activity...

HonestGovernment: I thought you were going to say I should change my motto to "All the news that's s**t to print." Best, Don Bauder

I think a better name for a place that aims to give away courtesy vibrators would be "Sceams-R-free." Not that I would know anything about that.

justpow: As long as it is understood that these would be screams of ecstasy. Best, Don Bauder

Location is everything. Had they held the giveaway in La Jolla, we'd have experienced something akin to an earthquake last night.

Apparently that cart turned out to be a Trojan Hearse.

Duhbya: I suppose you are right. Nothing is new in the field of vibrators and necrophilia. Best, Don Bauder

Good grief. "Ladies" don't peddle vibrators: women or babes do. And it's no wonder they wouldn't converse with a financial writer who lives far away. Funny story, terrible jokes, but nice photograph, Matt -- worth at least a thousand words.

monaghan: Absolutely, "ladies" could peddle vibrators. The word "lady" can be taken in two opposite ways. A "lady of the evening" or "lady of the night" is defined as a prostitute, fallen woman -- you get the idea, the kind that prowled the Stingaree district 100 to 150 years ago. You remember the classic Amos'n Andy joke: "Who was that lady I saw you out with last night?" Answer: "That was no lady; that was my wife." Ah, double meanings.

Yes, Matt Potter took an excellent picture. I had asked him to go over there when the female employees of the Stingaree didn't want to talk about the success of the event, and I sensed that things were not going so well. Best, Don Bauder

It's 2013, for crying out loud. Ladies can sell whatever the hell they want and still be ladies.

If they date alternative weekly editors, however... there's gotta be a line somewhere!

Randy: Agreed. In 2013, ladies in BOTH senses of the word can peddle vibrators. Best, Don Bauder

Maybe if those vibes had a strap attached to them, the "ladies" with a decidedly masculine demeanor or the lipstick brigade might have snapped them up? Or perhaps the employees at the Stingaree could have personalized the machines with crystals and called them "Blingarees?" Just sayin.

justpow: You are going over an old man's head. Best, Don Bauder

Dotinga, you are living in the past in every respect and could use a chill pill.

Modern women of feminist persuasion don't use the words "ladies" or "girls" as they seem condescendingly retro, like something out of "Madmen." Don Bauder is an informed, lively and prolific business and finance writer as well as a man of a certain age, so we give him a pass, especially when he gets a mind to write a funny story like this one.

monaghan: We old men get what's called a hoary pass -- and that gets us back to the subject at hand, doesn't it? Best, Don Bauder